Although various configurations can be setup via Material Room menus, and can be managed through the Simple interface, this topic is considered Intermediate level.

When the renderer cannot fill a pixel of the result due to the lack of light from any objects into the camera, as if the camera is looking into a void, then that pixel is filled with “background” (color, picture, movie frame). When exporting to a format which supports transparency, such pixels are left transparent. When using a sky dome in IDL lighting conditions, or when using a plane (billboard) -like object with an image assigned to it, then there is always an object in view of the camera, and no background or transparency will be produced.

When selecting Background in Material Room, various nodes are presented: 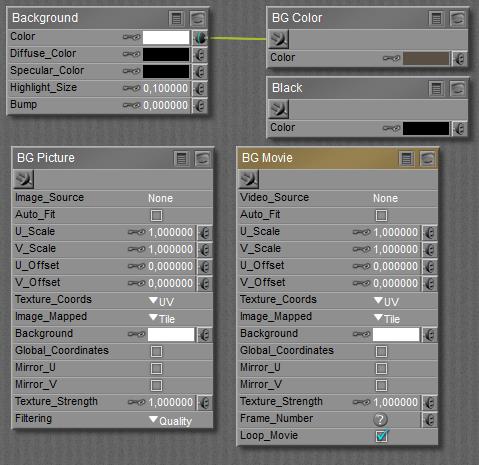 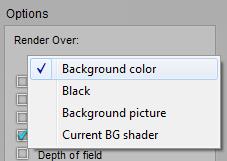 There are various ways to use those nodes in the Render Settings:

And there are various ways to fill those nodes

So, how do all these relate?

The Document Picker has entries for Foreground, Background, Shadow and Ground. The latter fills the Diffuse Color for the Ground object in the scene, Foreground and Shadow are relevant for Preview only. The 2nd from left, Background Color, fills the BG Color node:

Importing a Background Footage loads the selected image into the BG Movie node, AND connects that node with the Background node, AND sets Render Settings to (Render Over:) Background Picture. This displays the correct frame in the render, but it’s not that good in showing the right frame in Preview, and in adjusting it when stepping through the frames with the animation controls.

I’m free to fill the BG Color and/or the Black node with anything, and attach a complete node-tree to them as well. Any of them can be picked in Render Settings directly. The result of the BG Color node will show in Preview, unless… either BG Picture or BG Movie is attached to the Background node.

The Background node at last offers various slots, but after a lot of test renders the conclusion must be that only Color offers a well understood and well determined contribution to the result. The other slots do affect the result somewhat in some way, but are recommended to be left at their default (0 or black) value. The Color slot, eventually filtering anything which is plugged into it, is shown in the render when Current BG shader is selected in Render Settings. The node does not show in preview, nor do any regular nodes attached to it. However BG Picture or BG Movie do show when plugged into Color, but without any filtering by the swatch.