In the previous article it’s discussed how the Poser Gamma mechanism not only brightens up shadows and shades to compensate for the lack of radiosity and atmospheric scattering as can be found in real-life scenes, but also helps to add up lighting components like diffuse, specular, reflection and the like, especially when such components can be considered rather independent.

In some cases however, such components come to us in a ‘’ blend’, that is: more of one implies less of the other, which makes them far from independent. For example:

In those cases, the Gamma mechanism turns into a burden, instead of a benefit, when it includes the blending itself. I went through all the math (see last part of this chapter), and through a load of test renders, and my findings are:

The Fresnel_Blend is packed between two Gamma’s at the input side to take the effect out of the Reflect and Refract, and an inverse Gamma at the output side to put the effect back in again. Note that the Gamma node is not applying Gamma (darkening), but its inverse: Gamma Correction (brightening). This can be applied to all kinds of blending nodes: Fresnel_Blend, Edge_Blend, Color_Math (Blend), ColorRamp, you name it. It cannot be applied to the Fresnel node itself, as one cannot take the Gamma out of the reflections / refractions before they get blended.

The second best option, it distorts but not that much. Just apply the mentioned nodes as they come, apply transparency as it comes, it feels like “doing nothing”. But it also means: use Values for blending amounts and transparency, avoid using Color-swatches at any cost, and when using image-maps do set their Gamma values to 1.0 to bypass the mechanism.

This is the method followed automatically when the Fresnel node is used.

The use of Gamma = 1.0 for Transparency in all PoserSurface definitions in the scene can be enforced with the changeGamma scripts.

Older textures for characters offered a way to mimic advanced skin effects, like translucency and scattering. A small portion of red was removed from Diffuse (turning white into (245,255,255) a very mild cyan) and put back in again in the Ambient slot (turning black into (10,0,0) a very deep red). When rendering without Gamma, as was common in those days (Poser before version 10) this resulted in white (multiplied by any image map) plus a mild reddish glow.

However, when Gamma is turned on, the ratio gets distorted, the brightest component – the cyan in here – gets the upper hand, and all characters got the “smoking zombie look”.

Like this, left Andy without Gamma, right Andy with Gamma, same material and lighting: 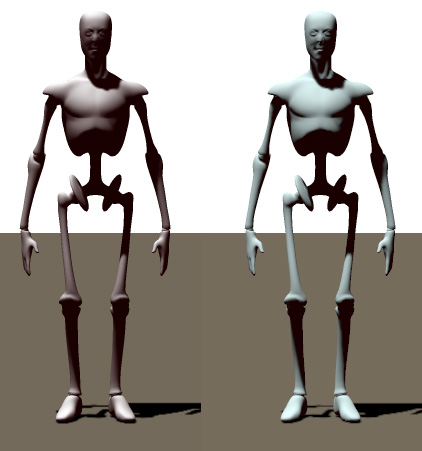 A closer look at Transparency

Consider an object, having a (surface) transparency of T=90%. When a direct (say 100%, white, point) light is illuminating the scene, this object will show the following behavior:

Actually, all the four elements mentioned above (all except the shadow mentioned first) add up to make one result. So how can be predict what happens when a gamma sandwich is applied to all that? We can be sure something gets distorted, as it would be a miracle when all things turned out equal. I do need math, figures and a lot of tests to get it sorted.

That’s for the next part of this chapter. For short: the Gamma mechanism, even when not applied to transparency itself, will produce a somewhat distorted result as it alters the balance between the ‘front’ and ‘behind’ scenes in the result. But when transparency itself is excluded from Gamma, then 1) I’ll get the best shadows which behave in sync with the other shadows in the scene and 2) I’ll get the least (and eventually most manageable) distortion, compared to when Gamma is included into the transparency.

So, I consider it best to treat Transparency as a value ‘thing’, I’ll avoid using color swatches to determine it, any image map involved will get Gamma=1.0, and I’ll use the various scripts to enforce that all over my scene materials.

The math and the figures

For those who want to check out on my findings themselves.

Consider two inputs, A and B, blended together in an x-to-(1-x) ratio. More of A implies less of B and vice versa. For instance, reflection blended with diffuse (a shiny surface), of with refraction (Fresnel).

So in case of blending / transparency, I prefer values, I avoid color swatches, and when applying images I set their Gamma to 1.0.