The Advanced interface to Material Room offers access to some more properties of the same material on one hand, and offers access to far more ways to define the details of all properties in the other hand. Creating and managing materials through the Advanced interface is considered Intermediate to Advanced level. While working from the Simple interface, one might wonder: “what do I miss?”. 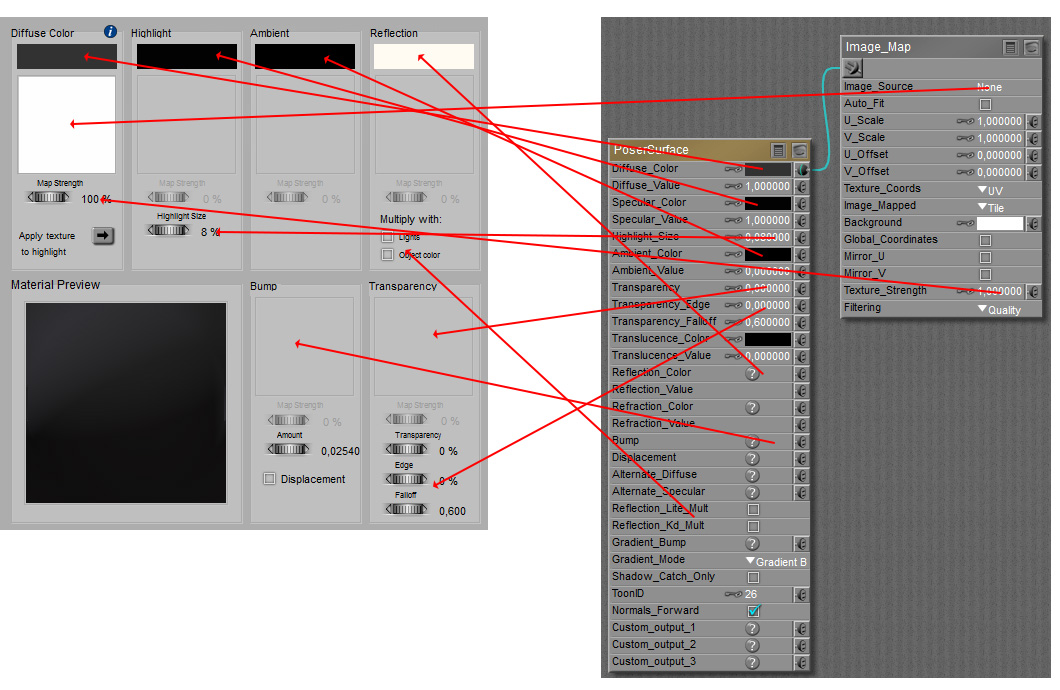 The following features are / are not supported in the Simple interface:

When using the Simple interface, I miss:

The straightforward way is to use the Material tab to enter the Material Room. An object or part of it already can have been selected, or can be selected from within the room itself. The Material Room offers a Simple User Interface, as well as an Advanced one. 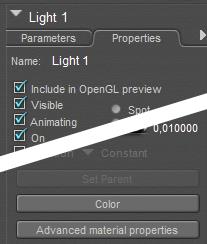 Next to that, there are some additional ways into Material Room, for the ‘material properties’ of Lights, Atmospheres, Backgrounds, and for some specific surface properties:

1)      When a Light is selected, its Properties tab offers an [Advanced material properties] button which brings me into the Material Room, for the coloring properties of that light.

and with the Shadow Color picker just right/below the Document window one affects the contents of the background material.

3)      From within Material Room some buttons on the right affect the object surface material at hand: 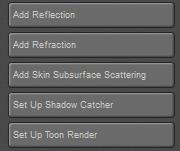 The [Create Atmosphere] button however affects the Atmosphere material, while the next buttons

In real life, a material is the stuff something is made of. Rock, brick, sand, knitted red wool, thin leaded glass, anything. Real life materials not only have a look, they also have a feel, a smell, and a response to our actions determined by a weight, flexibility, and the like.

In virtual life, like a Poser scene, a shader refers to a set of object (surface) properties that mimics the looks of a real life material, when rendered. So we can have a rock shader, a knitted red wool shader, etcetera. Shaders do not have a feel, or a smell, they’re inside the computer. But since everyone can tell real life from virtual, the word “material” is also used in these cases, at least in some software communities. So, in Poser one has a Material Room, to make a “brick material” and to assign it to a wall in the Poser scene. In Poser communities, “shader” is rarely used.

In real life, texture relates to the feel of the thing at hand. The surface roughness of the brick when I rub it with my hand, the structure of the fish I feel with my tongue when tasting it. In virtual life however, texture usually refers to the colors of an object surface. A texture then is an image used to assign such colors to elements in my Poser scene. However, since people are somewhat relaxed in their choice of words, they’re happy to assign a “brick texture” to a wall; not only implying color but roughness and reflectivity as well. So in those cases texture means material means shader.

On the other hand, mapping (as in: UV-mapping) is the term for assigning images in general to an object surface whether it’s for coloring or for determining roughness or reflectivity. So some people might use “map” while referring to the image driving the coloring process too. Fortunately, there is some method in this madness: as shader is hardly used in the Poser community, material or texture is used instead. The people using material for the whole thing tend to use texture for the coloring images. The people using texture for the whole thing tend to use texture-map for the images. But be aware; without context or background info, “brick texture” still might mean either the whole thing or just the color-driving image.

The articles in this section discuss some terminology, and the various interfaces to the materials definitions:

Next subsections present articles on defining the surface properties of objects, on a (II) Simple , (III) Intermediate and (IV) Advanced level, as well as on defining the properties of (V) Non-objects (atmosphere, background, lights) as far as these are handled through the Material Room interface. The Appendix lists all Material Room nodes and relevant Render Settings, and their availability in the various Poser versions.