Although various configurations can be setup via Material Room menus, and can be managed through the Simple interface, this topic is considered Intermediate level. 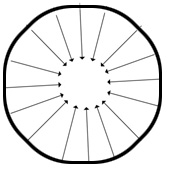 Most scenes require some kind of environmental lighting, and Poser offers various ways to establish that.

One (recent) way is to enable InDirect Lighting (IDL) and to encapsulate the entire scene by a huge Sky Dome object, with an image mapped onto it, and having its surface normal pointing inward. This method uses extensive raytracing, and is resource intensive (memory, CPU power, render time, user patience). The dome sends its light rays inward into the scene, and from there the light gets bounced all around.

Another way is to put an Image Based Light (IBL) in the scene. An IBL is a kind of point light, with an image (frontally) mapped onto it, but with its light rays traveling inward towards the lamp position. What does that mean? Well, 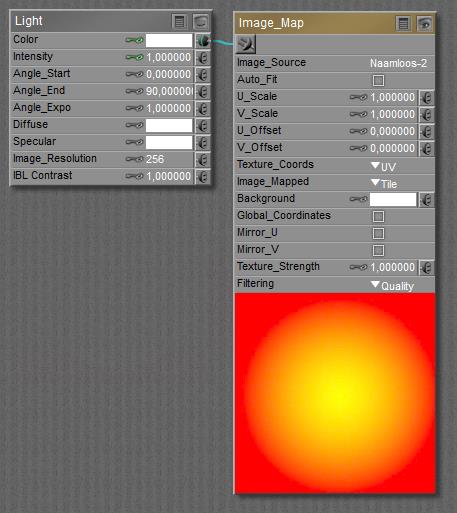 So the image is wrapped around the point light, and the bright yellow midsection is related to the mid-frontal part of the light. The red edges of the image all fold onto the mid-back side of the light, and all areas top side and bottom get the orange taint. That’s: frontally mapped.

See http://www.book.artbeeweb.nl/?p=3090 for details on translating the environment to IBL images.

In the image above, the IBL light resides at 0,0,0 between Andy’s feet. And the light rays are coming in, so Andy is colored yellow at its front, red at its back and orange at his top, sides and bottom.

Tip: for IBL lights, shadows should be OFF. As those lights cannot be placed but can be rotated (directed) only, and because light rays are considered coming in towards that point of interest, shadows from IBL lights tend to get somewhat unnatural, to say the least. 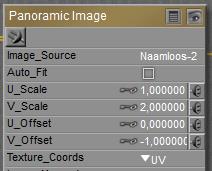 The ball next to Andy uses the probeLight image mapping which offers the same mapping and image as used for the IBL, so the IBL effect is exaggerated in this scene, to illustrate the effects of mapping and of the lighting direction. As far as mapping is concerned, probeLight works well on a basic Poser Ball, and just offers some extras for tuning image appearance and some squeezing and stretching compared to just plugging in the image_map itself. The Hires ball however turns out quite hard to orient properly which becomes apparent when an image is applied to it.

As IBL serves either as an extra or as a replacement of an IDL sky dome, the remaining question is: can the IBL-image be mapped onto such a dome. Yes it can, and it works immediately on the geosphere and hemisphere from the regular Poser content, and on Bagginsbill’s EnvSphere and EnvHemisphere. Bagginsbill’s EnvDome offers a slight shift in mapping, which has to be compensated for. (V_Scale is doubled, and V_Offset is set to -1).

No, Poser does not support selective lighting.

However, Poser does support rendering on a per-light basis (menu Scripts > RenderControl > RenderPasses)

This way one can obtain a lot of half-products (“render passes”) which in turn can be combined in post. Usually, stacking the images as layers in an image-handling program like Photoshop, with the layers set to Screen mode, is the way forward. A tutorial on Poser Render Passes can be found at http://www.book.artbeeweb.nl/?p=388 .

In various cases, it might become handy to have lights that shine in preview only and do not affect de render result. This can be done easily, but requires the use of the Advanced interface to the Material Room. The options required are not available through the Simple interface.

Open de Light features in Material Room, and black out the Diffuse and Specular entries. 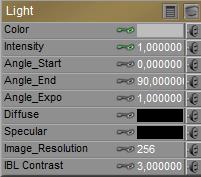 Note: under IDL (InDirect Lighting) rendering conditions, all objects in the scene behave as a light, but diffuse only (no highlights). IDL lighting does not show in preview. But IBL (image based, direct) lights do show in preview, producing the appropriate local colors as well. So, in order to approximate IDL conditions – like a sky dome – in preview: add an IBL with the same dome image, and have its Diffuse channel blacked out (to have it switched OFF at render time).

Do pay attention to the appropriate orientation of the image, though!

In various cases, it might become handy to have lights that produce highlights only, or just no highlights at all. This can be done easily, but requires the use of the Advanced interface to the Material Room. The options described below are not available through the Simple interface. 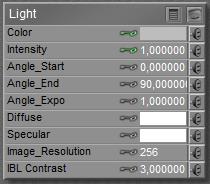 When I open the properties of a Light in Material Room, I see

The first is a necessity in IBL or IDL lit scenes, as these do not produce any specularity themselves (but diffuse light only). Usually, I don’t need the extra diffuse part.

The latter is a handy tool in scenes with IDL lighting only. This lighting does not show in preview, so for building the scene I need some lights which won’t show at render time.

How the aspects work together:

Poser lights can be controlled at various places.

In the Light Controls panel, the dots (bottom left) indicate intensity, I can drag the yellow knob for adjustment. Next to it, mid bottom, is the color indicator. Click it to adjust the color.

In the properties / parameters of the light, the color and intensity can be adjusted numerically. Red, Green and Blue take values 0..1, but Intensity also takes negative numbers (color inverts the light) and values over 100%.

From Material Room, Simple interface, a color can be assigned, as well as an eventual image-map. The latter is not available in the ways mentioned above. Intensity is not available.

From Material Room, Advanced interface, both Color and Intensity are available and image-maps as well as other kinds of nodes can be attached. Intensity again takes negative numbers and values over 100%. 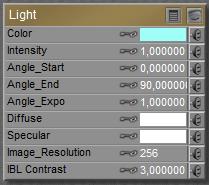 As usual with all Color/Value pairs in Poser materials definitions, the result is the multiplication (filtering) of both, and their respective inputs:

The Angle-parameters are obsolete, and might serve some compatibility with (very old) Poser versions. The use of the Diffuse and Specular swatches is discussed in the next article, they affect the render result only, not the preview. The last two, Image_Resolution and IBL_Contrast, manage the quality of the IBL (Image Based Lighting) when the light is used as an IBL source, set so in its properties.

The third group of articles is on Lights, which also can have some of their properties managed in Material Room. And next to that, renders result from light interacting with surface material definitions. I can’t master the latter without a proper understanding of the other two.

Rendering is not managed from Material Room. Hence it’s discussed in the separate Tips and Techniques section. That leaves light, as far as color and intensity are concerned.

And then Image based Lighting (IBL) and InDirect Lighting (IDL) kick in: