Depending on the Poser version I use, the Library can come as “internal” (or: embedded, as a regular Poser pane) or “external” (as a separate application). In the latter case, it might or might not be convenient when selecting an object brings Poser to the foreground or keeps the Library upfront. Poser to foreground means that I can quickly continue with my scene but also that for picking another object or pose or something I’ve got to bring up the Library again.

The Poser window presents a small button in the upper right corner to do so quickly.

Relevant options for Library behavior like this can be found in the Library tab in General Preferences. 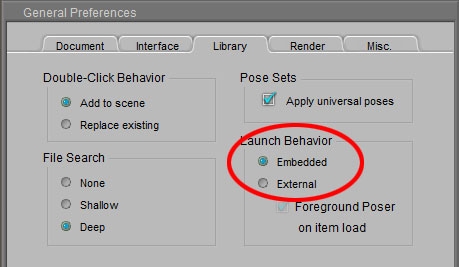 When I choose “embedded” (or when running the Library separately is not an option), I’ve got the choice between a docked and a floating form, like all other Poser panes. I found that the official manual is not always entirely correct in this, so I just try for myself what works out. (Note: see the Corrections and Additions post).

The structure of the library is quite straightforward from a technical point of view, but quite cumbersome from a user point of view: within each <base folder> I’ve got a folder called Runtime, containing subfolders Geometries (hosting the .obj object meshes), Textures (hosting the image maps), a lot more, and the Libraries folder which is addressed by the Library itself.

This Libraries folder contains (category) subfolders Camera, Character, and so on, and each of them contains files in specific formats, and thumbnail images in .png. The Library application (or pane) gives me access to the library (= the <base folder>) and the specific category (= subfolder in Runtime\Libraries) of my choice. 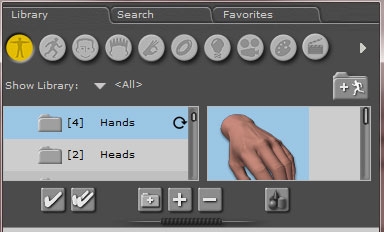 So if my selected Library is “Poser Pro 2010” and my selected category is “character” then I’ll see all subfolders within Poser Pro 2010 \ Runtime \ Libraries \ Character and only the .cr2 files within these. (Note: see the Corrections and Additions post).

The result of the way of working of the Library is a well understood confusion for users. The files for a figure, with expressions, poses, hair and a set of skin variations, are scattered around the Library. Some people therefore create a separate Runtime for every figure, but with a growing wardrobe a separate closet for each robe becomes impractical.

This is where the Favorites kick in: I can define my own structure and put say a dress and all its mat files, accompanying jewelry and more, all in one place. These places are subfolders in Runtime \ Libraries \ Collections, and they host just shortcuts to the mentioned files, plus a copy of their thumbnail image.

At the top-right of the Library window you might have noticed a “+ Runtime-folder” button, this one adds extra (external) runtimes to the selection, and adds an entry line in the LibraryPrefs.xml settings. In order to remove a Runtime from the collection, I have to select that one first using the Show Library list. Just clicking it in the list is not enough. After selection only the contents of that Runtime are shown, but also a “- Runtime-folder” button appears. That is, if it concerns a Runtime I’ve added myself earlier, I cannot delete the Runtimes which came at install time. And… I don’t delete anything except the reference to the content, not any content itself.

At the bottom of the Library panel I’ve got

When I’m in the Favorites tab, I’ll have the add-to-scene, the “add folder to favorites” and the “delete item from favorites” buttons. The latter only deletes the shortcut and thumbnail in the Collections, the original content itself remains untouched.

The behavior of the Library utility is managed at two places:

The General section manages the behavior of the Library Window, the Display section manages which panes are displayed, and the first three of them have their further details set in the remaining three sections.

Just see for yourself whether you need the Extended Details. The Breadcrumb bar might be handy for maneuvering around, and the Ticker brings us to various sections of the Smith Micro website.

The various options are well described in the Reference Manual (chapter 7).