Gamma Correction in Poser Pro is not implemented as just a post-effect only, applied onto the resulting render, as is the case with its Exposure Correction. The trick is that before rendering starts, all textures and color swatches as used in the materials (*) are anti-corrected first. So, colors are darkened, then everything is rendered, lights, shadows, reflections, refractions, indirect lighting and so on are applied, and then the resulting render is gamma corrected.
(*) Materials as in: manageable through the Materials Room. This affects object surfaces, background, lights and atmosphere.

This has the following net effect:

Let’s see what this brings us.

No Corrections (gamma off):

Now, consider the same with Exposure Correction switched on, at 2,4 which also gives a result somewhat comparable to a post-work gamma correction of 2.2.

In other words, not only does the back tile gets less light, which is exaggerated by the correction. The correction also affects the brightness distribution within the textures themselves and makes them look different from their original. 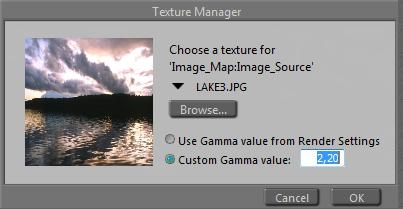 The interesting thing in here is that the pre-render anti-gamma correction is not only applied to textures, but to color swatches (and hence the generated, procedural maps) as well. When the reds of a texture and a color swatch are in sync (say: in Poser, or in PoserPro without GC), they stay that way (in Poser Pro, with GC). That’s good.