Although I’ll grasp transparency from my own experience, and although most characteristics of it are available through the Simple interface into Material Room, its implementation in Poser is not the easiest to comprehend. That turns the presentation of this topic into a mixture of Simple, and Intermediate elements, plus some Advanced issues too. Sorry for that.

Formally stated, transparency is the ability of a surface to let light to pass through. Transparency is a number, 0-100%. When that number has different values at various spots on the subject, a (greyscale) image can be used. Note that – in Poser – the image is used in an inverted way: 100% or black means: fully transparent, while 0% or white means: fully opaque. 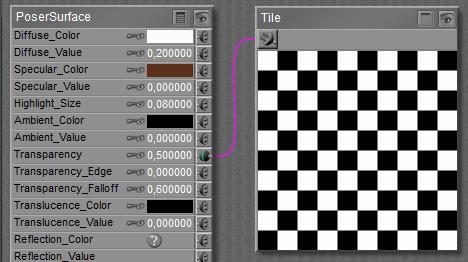 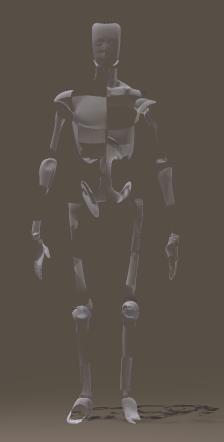 See this article on how both Simple and Advanced interfaces relate.

The behavior of Transparency can also be stated in another way:

There are three different reasons surfaces can let light pass through:

lace-like (highlights on substance only)

The same holds for Ambient, Bump, Displacement, and Reflection: when there is no material then there can’t be a surface response to light. But I have to tell Poser myself, as Poser does not distinguish the various interpretations of transparency (lace-like vs layer/glass-like). When using the Advanced interface: Transparency also does affect Alternate_Diffuse but does not affect Translucence, Refraction or Alternate_Specular.

When I look at, or through, a (semi) transparent object with various curves and bends, I will note that the frontal view differs from the sides. For hollow objects, light rays passing the front and back might meet less material underway compared with rays traveling through the sides. For solid objects this might be the opposite. On top of that, various causes for light-bends (called Refraction), absorption and scattering will reduce the transparency of objects at the edges. Next to all this, in real life transparency depends on the angle towards the camera: perpendicular angles have a much higher transparency than skew ones; for the latter, light rays just bounce off, and transparency decreases while reflectivity goes up. This advanced effect (known as Fresnel) is supported by recent versions of Poser, at the cost of serious prolongation of render times and increased memory requirements.

So when one wants an improvement over just transparency, without requiring the high level of photorealism that comes with Refraction, Poser offers a way to cheat to compensate for its inability to handle any kind of volumetric effects:

As Transparency 1.0 means fully transparent, the Edge should have a (much) lower value to mimic the mentioned effects in a believable way. The default is 0.0, completely opaque at the edges. When I do it the other way around however, and set the edges to a high value like 1.0 (combined with a low value for transparency), the edge will fade away like I’m presenting a gaseous, cloudlike object.

Small values for Falloff make a fast transition from edge to regular surface, and hence make a thin “surface” layer for the object. This surface thickness seems proportional to the size of the object, the Falloff is a percentage of something, it’s not an absolute value. And although results can become quite unnatural, high values like 10 and up are possible and allowed.

Although Edge and Falloff make some sort of skin or surface layer for a transparent object, there is no sharp boundary at the inside. As a result, these parameters cannot make a hollow object. 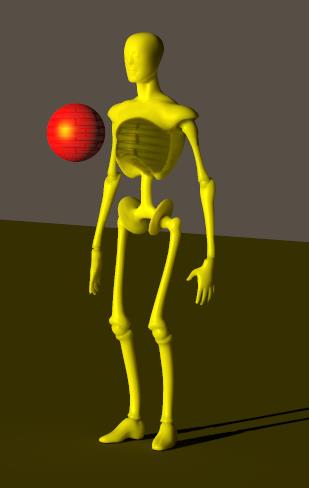 One image says it all: in Poser, yellow light passing through a red patterned-transparent ball will cast a patterned black shadow onto the object behind it, mixed with the yellow of the light. In nature, such a shadow would be red (as the passing light gets filtered).

Neither transparency, nor a diffuse or a refractive color will color-filter the light rays passing through the ball as such, and no reddening of the shadowed area will occur in any way.

Poser Firefly does have its limitations, and this is one of them.

Transparency and the effect of Viewing and Lighting angles

When the light passes under an angle, nature will reduce the transparency of the object because the path within the object (or through the foil, which does seem have some thickness anyway) becomes longer, and more light gets absorbed along the way.

The math: When – in real life – light passes a block or foil of semi-transparent material, with a thickness w (in meters or alike) and under an angle a, then a portion of that light will be taken out, and the remaining portion – known as object transparency – is exp{ -k*w/cos(a) }  with k being a constant describing the material itself. Low k values, close to zero, make high transparency and large values make low transparency. The same way thick objects (large w value) are less transparent than thin ones. But as Poser does not support material properties or thicknesses, all I can do is set a surface transparency T in PoserSurface. Then the final object transparency will be T2/cos(a) .

Poser does support this angular behavior, but not exactly. I guess because that would require too many calculations during the render. But as the following graph shows, it does a nice job: 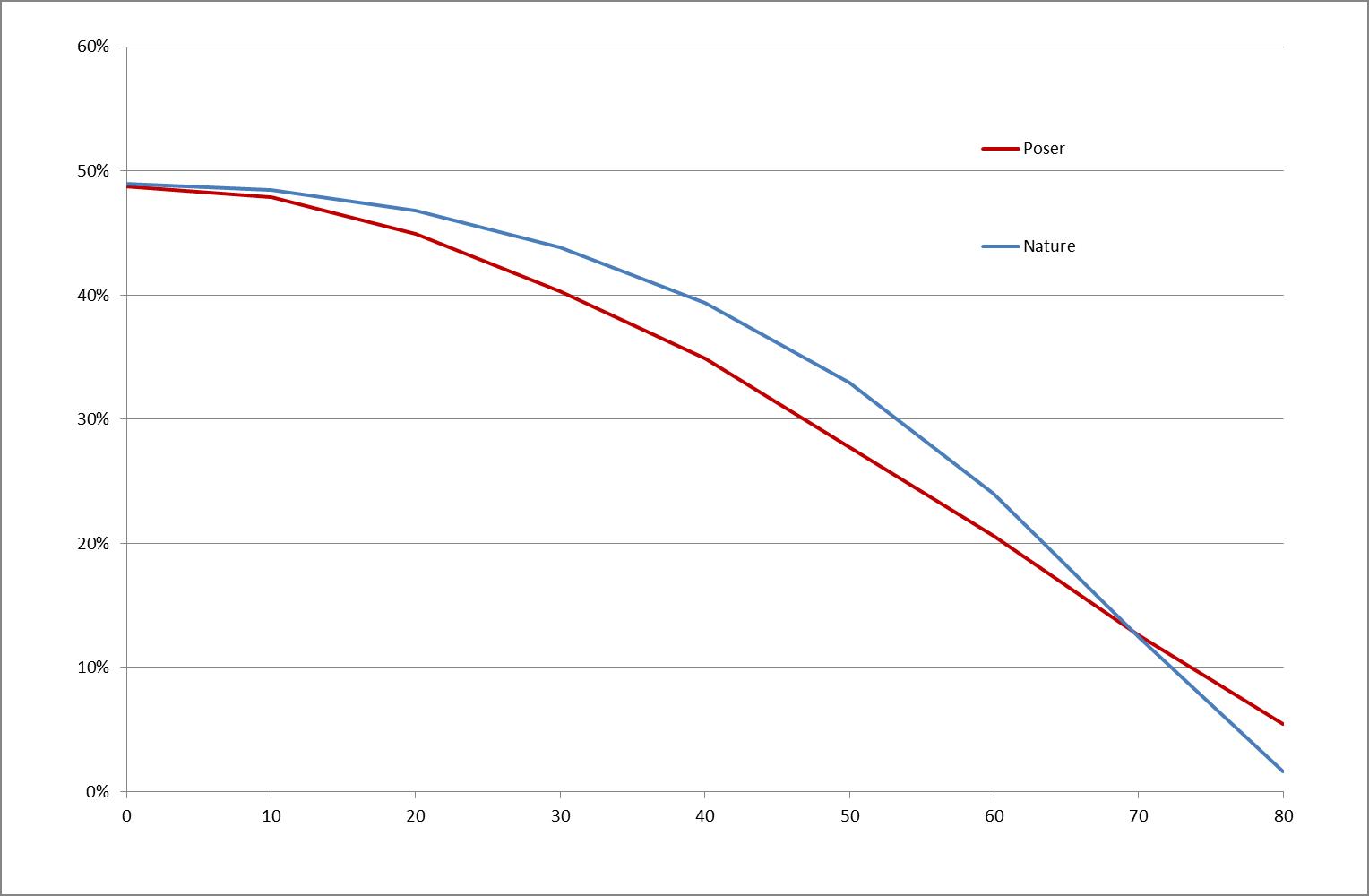 Conclusion: For an application which is not doing any volumetrics, and is not raytracing except when assigned to do so for specific surfaces (reflection, refraction), Poser does quite a nice attempt to stay close to “the real thing” in an efficient and effective way. Transparency is a surface property, as if a foil surrounds the object at hand, but that foil is supposed to have some finite thickness and Poser supports the angular dependency which comes from that. At the detailed level, it does show differences which cannot be eliminated any further. Poser does have its limitations, and this is one of them.

Transparency and the effect of Gamma Correction

Consider an object A blocked by another object B, that is: B will cast some shadows onto A. For various reasons those shadows tend to look overly dark. For instance, because in real life light scatters around in the air thanks to tiny dust particles floating around, and because ceilings, walls and objects in the scene scatter light around as well. Poser offers a correction mechanism for that: Gamma Correction (aka GC), present in Poser 10 and Pro 2010, and up. GC will brighten up shadows and will dim highlights to give the render a more pleasant and more realistic look. So far so good.

Now, consider object B to be partially transparent, say 90% per surface. Light passing from its front to back will be reduced to 90% x 90% = 81% and object A will just receive less light instead of no light at all in the deep shadow. That will be catered properly by GC again. Actually, GC will brighten up the dimmed area back to about 90%, and keep it in sync with all other shadows and shades in the scene. But any light from A, through B towards the camera will be dimmed to 81% as well as being filtered by B’s transparency too. And as Poser cannot tell the difference from all those dimming effects, shadowing or transparency or anything, this transparency effect is brightened up to about 90% as well. As a result, the object B looks far more transparent than it’s designed to be, thanks to GC.

Now what should I do? Should I let Transparency bypass the Gamma mechanism resulting in proper shadows and a slightly too bright object, or should I let Transparency participate in the Gamma mechanism, with probably a more accurate object but too dark shadows, which can be brightened up in other ways? This is discussed in detail, but for short: I should do the first. Transparency should bypass Gamma like Bump and Displacement do. The object will be a bit off then, but when I act the other way, it will be off as least twice as much.