In a real camera, the change in focal length would have brought Pink Andy and the back wall in a sharp state as well. In Poser, the blur remains the same. And because the back end of the scene is brought forward when enlarging the focal length, the blur even looks like it’s increasing instead of the other way around. 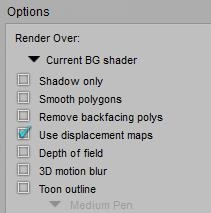 The other two parameters: hither and yon, have no physical reference. They mark the clipping planes in OpenGL preview only. Everything less than the hither distance will be hidden, and everything beyond the yon distance will not show either. That is: in preview and in preview render, when OpenGL is selected as the delivery mechanism. Not when using Shreed (the software way of getting previews), not when rendering in sketch mode, not when using Firefly.

This can have a surprising effect. When the camera is inside an object, but less than the hither distance away from the edge, you won’t notice it in the preview because the objects mesh is clipped out. But when you render, the camera is surrounded by the object and will catch no light. This gives the “my renders are black / white / … while I have the right image in preview” kind of complaints.

It sounds stupid: how can one land the camera inside an object? Well, my bets are that it will happen to you when you’re into animation. Smoothing the camera track will give you some blacked-out frames. Previewing the camera track through the Aux camera, and/or adding a ball object on top of the camera entry point (watch shadows!!) can help you to keep the view clear. Just setting the camera to Visible in the preview might not be enough. 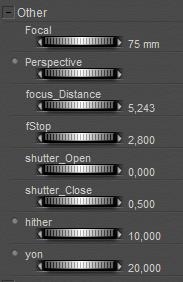 Having said that, let’s have a look at the various camera properties.

In order to determine the Field of View for a camera, I build a simple scene. Camera looking forward, and a row of colored pilons 1 mtr at the right of it, starting (red pylon) at 1 mtr forward. So this first pylon defined a FoV of 90°. The next pylon (green) was set another 1 mtr forward, and so on. Then I adjusted the focal length of the camera until that specific pylon was just at the edge of the image.

In a 2000 pixel wide render, I want to fill the entire background with a billboard-like object. For quality reasons, it should have a texture of 3000 (at least) to 4000 (preferably) pixels. When using a 35mm lens, every 3 mtr forward sets the edge of the billboard 1 mtr left, and the other edge 1 mtr right. Or: for every 3 mtr distance from the camera, the board should be 2 meters wide. At 60 mtrs distance, the board should be 40 mtrs wide, left to right, and covered with the 4000 pixel image.

Modern real life cameras do have various modes of Automatic. Given two out of

the camera adjusts the third one to the actual lighting conditions, to ensure a proper photo exposure.

Some 3D render programs do something similar, like the Automatic Exposure function in Vue.

Poser however, does not offer such a thing and requires exposure adjustment in post. For instance by using a Levels (Histogram) adjustment in Photoshop, ensuring a compete use of the full dynamic range for the image. Poser – the Pro versions – on the other hand, support high end (HDR/EXR) image formats which can survive adjustments like that without loss of information and detail.