Once I manage to get images out of my 3D software like Poser or Vue, I might ask myself: “can I make 3D stereo images or animations as well, like they show on 3D TV or in cinema?” Yes I can, and I’ll show you the two main steps in that process.

Step #1 is: obtain proper left-eye and right-eye versions of the image or animation
Step #2 is: combine those into one final result, to be displayed and viewed by the appropriate hardware

In order to make more sense out of step 1, I’ll discuss step 2 first: how to combine the left- and right eye images.

For still images, this can be done in a special program like the Anaglyph Maker, available as a freebee on the internet http://www.stereoeye.jp/index_e.html. It’s a Windows program. I unpack the zip and launch the program, there is nothing to install. Then I load the left and right images 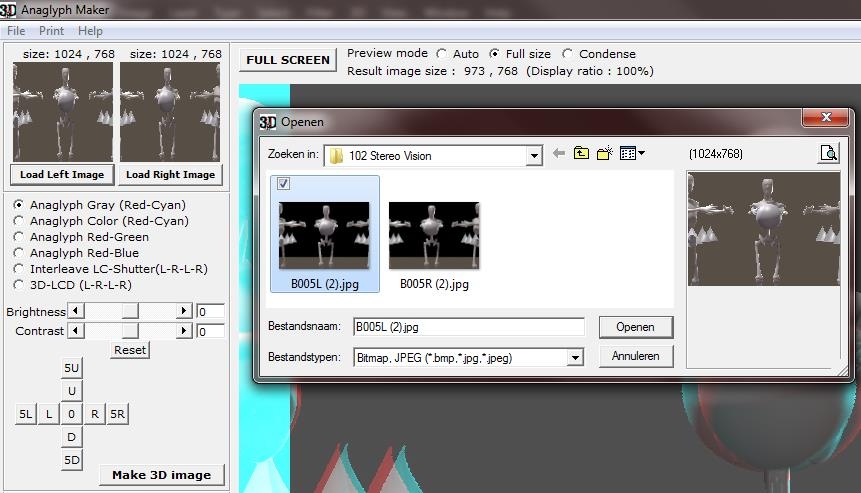 And I select the kind of 3D image I want to make, matching my viewing hardware. The Red-Cyan glasses are most common, as Red and Cyan are opposite colors in the RGB computer color scheme. Red-Green however presents complementary colors for the human eye but causes some confusion as Magenta-Green are RGB opposites again. Red-Blue definitely is some legacy concept.

When I consider showing the result on a interleave-display with shutter-glasses, or a Polarization based projection scheme, Anaglyph Maker can produce images for those setups as well. Those schemes do require special displays but do not distort the colors in the image, while for instance the Red-Cyan glasses will present issues reproducing the Reds and Cyans of the image itself. This is why images in some cases are turned into B/W first, giving me the choice between either 2D color or 3D depth. Anaglyph Maker offers this as the first option: Gray.

I can increase Brightness and Contrast to compensate for the filtering of the imaging process and the viewing hardware, and after that I click [Make 3D Image].

Then I shift the left and right images relative to each other until the focal areas of both images coincide. The best way to do that is while wearing the Red-Cyan glasses, as I’ll get the best result immediately. 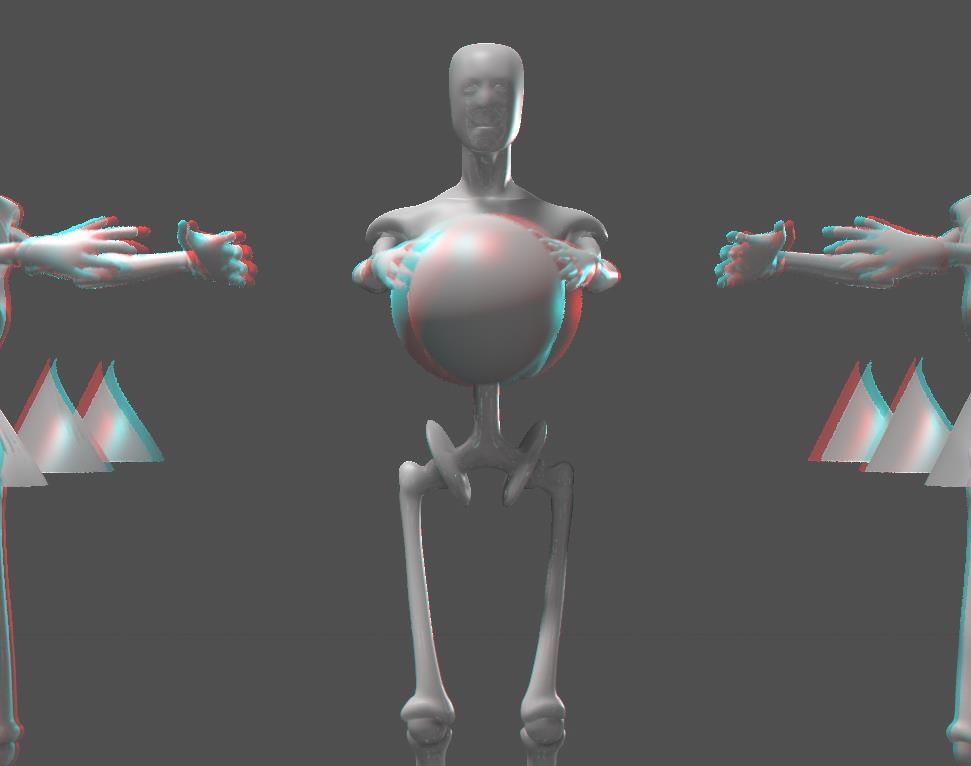 Or the (uncolored) left and right images, which are shifted into the correct relative positions.

Photoshop or GIMP or …

Instead of using special software, I can use my imaging software instead. For single stills this might be tedious but for handling video or animations it’s a must, as there is no Anaglyph Maker for handling all movie frames in one go, while Premiere or so are quite able to do that. And then I’ve got my own 3D stereo movie.

Please do note that I found that images with transparency, like PNG’s, present quality issues while non-transparent ones (JPG’s, BMP’s) do not. Anaglyph Maker supports BMP and JPG only. I can swap Left and Right in the steps above, as long as the Right image is combined with a Red layer (both start with ‘R’, to easy remembering), as all Red-Cyan glasses have the Cyan part at the right to filter the correct way.

Although in real life dedicated stereo cameras can be obtained from the market, this is not the case for 3D software like Poser or Vue, so I’ve got to construct one myself. Actually I do need two identical cameras, a left-eye and a right-eye one, at some distance apart, fixed in a way they act like one.

The best thing to do then is to use a third User Cam, being the parent of both, and use that as the main view finder and if possible, as the driver of the settings of both child cameras.

Such a rig guarantees that camera movements (focal length adjustments, and so on) are done in sync and are done the proper way. Like rotations, which should not take place around each individual camera pivot but around a pivot point common for both eye-cameras. In the meantime, the User Cam can be used for evaluating scene lighting, composition, framing the image and so one before anything stereo is attempted.

Les Bentley once published a Stereo Camera rig on Renderosity. You can download it from here as well, for your convenience. Please read it’s enclosed Readme before use.

Now I’ve grasped the basic principle, the question is: what are the proper settings for the mentioned camera rig? Is there a best distance between the cameras, and does it relate to focal length and depth of field values? The magic bullet to these questions is in Berkovich Formula:

This formula works for everything between long shot and macro take, is great for professional stereoscopists working in the movie industries, and helps them to sort out the best schemes for anything from IMAX cinema to 3D TV at home, or 3D gameplay on PC. It relates the distance between both cameras, aka the “Stereo Base” SB with various scene and camera settings:

For everyday use in Poser or Vue, things can be simplified:

As a result, to make the left and right eye images overlap at the focal point, one image has to be shifted with respect to the other, for

For a still image, I do not need formulas or calculations as I can see the left and right images match while nudging one image aside gradually in Photoshop. But in animations, I would not like to set each frame separately. I would like to shift all frames of the left (or right) eye film for the same amount of pixels, even when focal length and focal distance are animated too. This can be accomplished by keeping SB * f / A for constant, by animating the StereoBase as well.