This article presents a description of the following nodes from the 3D Textures group:

The first ones are random number or fractal based “cloudy” textures which are quite suitable for dirt patterns on walls and for atmospheric clouds. The latter or more generic helper functions. The next article offers descriptions of the remaining nodes from the 3D Textures group.

This node returns a result between -1..+1, driven by a fractal function. Although fractal results make a strong irregular, even random impression, they differ from noise in various ways: 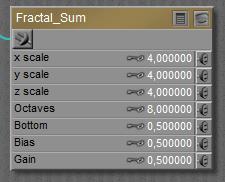 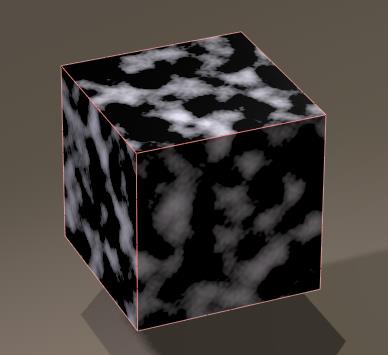 Although the fractal function generates values from -1..+1 (with like a sine wave, more ‘hits’ in the extremes), these are folded into the 0..1 range. Without further measures, the 0.. -1 range is folded onto 0.. +1 and that will give a lot of high (bright) values and far less low (dark) values. The solution is to lift the result with the Bottom value, 0.5 by default. In that case, the result ranges from -0.5..+1.5 and the 0.. -0.5 is folded up onto 0.. +0.5 while 1.. 1.5 is folded down onto 1.. +0.5. That gives as much brights as darks in the pattern. Simply stated: 0.0 or lower will result in a bright, bleached pattern. Raising it will darken the pattern till it’s completely black, until 1.0 is entered exactly which turns the result completely white.

Bias and Gain get their (usual) incomprehensible explanation in the manual, sorry for that. Generally, when I consider the result of this node to be a greyscale image of some sort, Bias refers to its brightness while Gain refers to its contrasts, both as if applied by Photoshop or alike in a pre-processing stage. Both default to a 0.5 value, and lowering Bias pushes the bright details into black until all brights are gone at 0.0 while increasing Bias adds more bright details into the already bright area. This does not reduce the black areas but just removes the details, and makes hard-edged splotches. Gain works about the other way around. 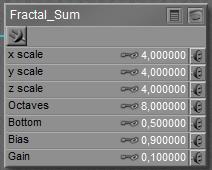 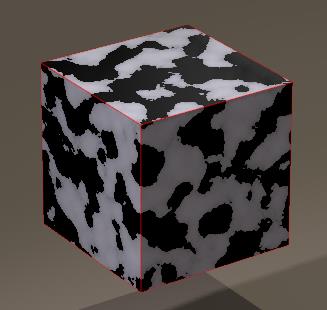 This is just another fractal function which offers parameters similar to Fractal_Sum, but results in more complex patterns as it’s derived from various fractal formulas combined into one. 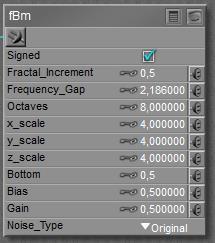 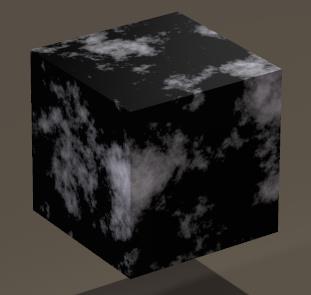 These patterns are considered especially useful for creating terrains, which requires that this node is to be plugged into the Displacement slot of PoserSurface. Though it shows too much detail for a simple stain, it might also be used for a worn, aged and rubbed one. When used for terrains, it’s advised to reduce the Bottom parameter to its default 0.0 to get rid of the black (so non-displaced, flat) areas.

What are the other parameters about?

Noise_type offers the usual choice between Original (for compatibility) and Improved (recommended), and Signed folds the 0..-1 range of fractal results back onto the 0..+1 range. This folding somewhat disables the use of the Bottom parameter, what – as already said – can be kept at its default 0.0. Frequency_Gap effects the spatial distribution of the pattern, values between 2..3 are recommended and one can leave the default as is. Lower values take the details out and higher values have no effect.

Fractal_Increment is the most interesting parameter. At 0.0 the result turns out very noisy, loose pickles everywhere. At 1.0 the result is quite consistent, and looks a lot like the simpler Fractal_Sum node. So here I can adjust the complexity and noisiness of the result, and the roughness of terrains made with it. 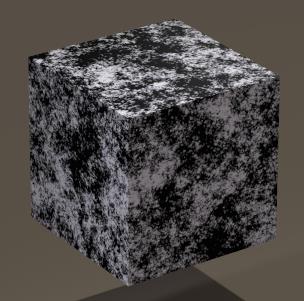 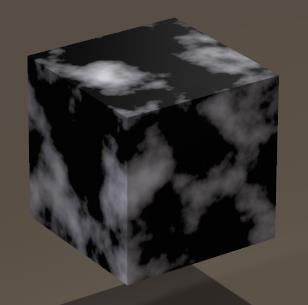 Clouds, a mixture of fractal and turbulence, serve well in backgrounds as well as in driving the fog density in Poser Atmosphere. They also serve well for fine patterns in stone. 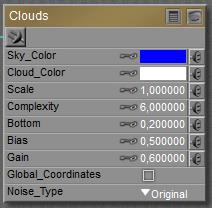 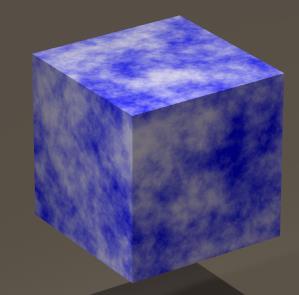 There is one Scale parameter for all directions, larger values make larger patterns. Higher Complexities make richer, more detailed and crispier patterns while Bias caters for the balance between dark (Sky) and bright (Cloud) areas. Higher values make less cloudy skies. Gain serves as a mixture: low values make a closed, less detailed cloud pattern while high values make an open sky with sharp-edges clouds. Generally, when I consider the result of this node to be a greyscale image of some sort, Bias refers to its brightness while Gain refers to its contrasts, both as if applied by Photoshop or alike in a pre-processing stage.

As discussed at the other nodes above, Noise_Type lets me pick my favorite random number generator behind all the irregularities, and the Global_Coordinates option determines whether the pattern is relative to the object (OFF) or to the Poser space (ON).

Like Fractal_Sum is best for surface effects and fBm is best for terrain displacements, Turbulence is best for cloudy patterns as are required in a Poser Atmosphere (instead of a PoserSurface). The best way to look at it is to consider a space full of tiny droplets that make a fog, and some wind pushing some of them into other areas. So some areas get more filled, and adjacent areas get less. 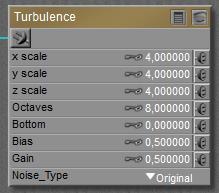 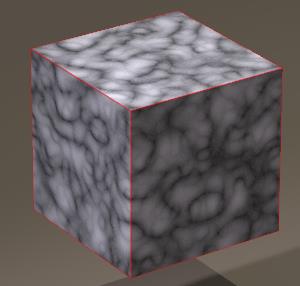 and the parameters can’t be a surprise anymore, they all were discussed in Fractal_Sum as well. Turbulence does make nice marbles too, as I can see in the sample above.

Noise is not a fractal, but just generates random values (brightnesses) for each point in space. So adjacent positions do not have adjacent function results, the function is not continuous. 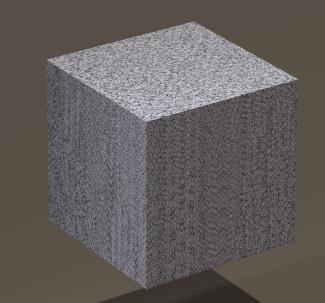 The X/Y/Z_index means the same as X/Y/Z_scale in the previously discussed nodes: larger values make smaller patterns. The result is a value between Min and Max, I can use values closer to each other to generate small color or brightness variations.