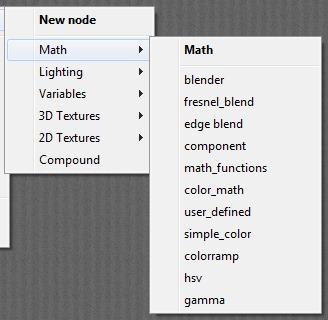 The Math group offers various nodes that can adjust and combine colors, images and other texture elements.

which mix two color, image or texture inputs into one result. In the next article:

which split and combine value or color / image inputs in a mathematical way. In the article after that:

which generate colors from value inputs, and in the last article on Math nodes:

Of course, for static Blending values there are other ways of combining colors or images. But the power of this node is that the blending can be made dependent from space and time, by feeding any node from the 2D Textures (a pattern or blending image map), 3D Textures (a fractal) of Variables (U, V, framenumber) into it. Note than when an image-map is attached, this one should have its Gamma value set to 1.0 explicitly (Poser 1 or any PoserPro), to prevent the Gamma mechanism from interfering with the blending ratios.

This node blends two inputs depending on the angle between the surface and the camera. When the camera looks straight (perpendicular) upon the surface the Inner Color will show, and at the edges, at skew angles towards the camera, the Outer Color shows.

When I take a 2D perspective on the result, the edges are “out” and the area between the edges is “in”. I can also take a more volumetric approach; the more I look upon the middle portion the more transparent an object will be and the more I’ll see from the Inside, while at the edges I’ll see more of the surface itself, the Outside. Both give me a handle on the meaning of Inner and Outer Colors.

The Attenuation drives the (exponential) transition function. At minimum 0.0 no outer color will show, but at increasing values the edge effect will become apparent: 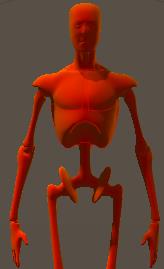 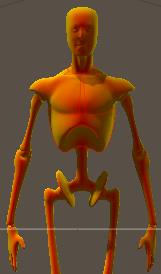 Since Edge_Blend was used frequently to approximate a Fresnel effect, additional nodes were added to recent Poser versions to help users out. One of those is Fresnel_Blend, which also takes Inner and Outer Color and an appropriate Index of Refraction (IoR). Instead of the (exponential) transition offered by Edge_Blend, the actual Fresnel function is used.

This Fresnel effect in real life concerns the balance between Reflection on one hand (high at the edges) and Refraction (with embedded Transparency, low at the edges) on the other hand. So combining Fresnel_Blend with those respective nodes is an obvious thing to do. For that reason, an explicit Fresnel node is offered which offers exactly that. Real-life IoR values can be found here.

Unfortunately, all those reflections and refractions are very computation intensive, and require vast amounts of render time. When I want to compromise, to cheat, to take shortcuts, then this Fresnel_Blend node can offer a nice way out. And when I like to make things even more complex, like combining reflections with specularity and assign Fresnel to this combination, or when I want to get Fresnel effects into the PoserSurface Transparency itself. Then I need this Fresnel_Blend node as well.