The Math group offers various nodes that can adjust and combine colors, images and other texture elements. This article discusses:

which split and combine value or color / image inputs in a mathematical way. See this overview of the Math group.

This node accepts a vector, either representing a color (Red, Green, Blue) or a pointer in space (Variable nodes, like P,N and dPdu etc.). From that vector it picks the first, second or third Component (using values 0, 1 or 2 for that) and presents that value as a result.

How do the inputs work together to make an output?

Both nodes produce a result from a math operation on two inputs. They both offer the same list of choices for such operations. The difference between them is: 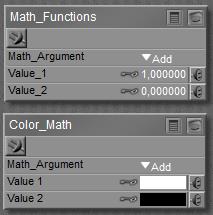 Most functions do what I can expect from them, as defined by any basic math textbook. See the Poser Reference Manual on them in case of doubt. Some operations need both inputs (like Add and Multiply), other operations work on Input_1 only (like sine, square root).

The Smoothstep, Bias and Gain operations expect an image for Input-1. Smoothstep then will perform the bicubic enhancement which is about standard when an image is resized and resaved in my imaging software. Bias and Gain expect a value (or three-value vector) for Input_2 as well, and will adjust image brightness (Bias) and contrast (Gain) accordingly. The value 0.5 is considered neutral (no net effect), lower values (down to 0) reduce brightness/contrast, and higher values (up to 1) increase them. Negative contrasts will invert the image input.

Note that all images and all color swatches can be affected by the Gamma mechanism (Poser 10, or all Pro versions) at render time, and hence the outcome will be affected as well, unless explicit measures are taken to prevent that.  Images should have their Gamma value set to 1.0 and swatches should have brightness 1.0 (that is: at least one color component should equal 100%).