The history of Poser is rather well documented in Wikipedia. Just a brief overview:

MetaCreations was a merger of the people from Poser, from Bryce, from Painter, from RayDream/InfiniD, from Kai’s Power Tools and alike. Thanks to this, Bryce was able to handle Poser files from the early days on, and thanks to Kai Krause, they both have a similar user interface. When MetaCreations broke up, Bryce and Painter went to Corel who later sold Bryce to DAZ. InfiniD went to Eovia to become Carrara, which later ended up at DAZ as well. The Poser people continued as Curious Labs. 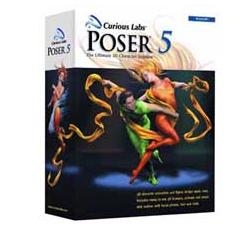 Establishing Poser 5 however turned into a shear disaster (well described by John (Vanishing Point) Hoagland himself in http://www.cocs.com/poser/poser5mess.htm) and e-Frontier took over. After a while they sold their entire American branch to Smith Micro (founded by William Smith Jr). The Japanese branch is still known for the 3D modeler “Shade” and still represents the Japanese version of Poser. From then on Poser is in the hands of Smith Micro, Poser Pro gets introduced, and functionality has increased a lot since.

For a better understanding of the advanced features like Cloth Room and FireFly, it pays off to elaborate a bit on that hectic period around the turn of the century. Let’s take a look from the other side.

A sequence of splits and mergers (1998) moved the modelbank to Viewpoint (later: Digimation), created Next Limit (RealFlow) and also Reyes Infografica, known from 3DS Max plugins like Cloth:Reyes, Cartoon:Reyes, NPR:Reyes and more. In 2000 the latter sold its plugin technology for use in Poser. Cartoon:Reyes became Poser Toon render (the Sketch render was already available in Poser 4), NPR:Reyes became the Poser FireFly render, Cloth:Reyes became Cloth Room and so on. Javier Reyes himself continued with Virtual Fashion, until that came to its own end as a product (say 2009).

So now we know where those Poser modules came from, and why creating Poser 5 took so much trouble: a lot of (Spanish?) 3DS max plugins had to be integrated in the Poser 4 framework. In the meanwhile, sometimes some confusion passes by.

The rendering module
The NPR:Reyes (NPR = Non Photoreal Render) aka FireFly render is based on the initial Renderman REYES technology, where REYES is an acronym for Render Everything Your Eyes (can) See. The Reyes from Infografica is just a normal Spanish name. In the NPR:Reyes product, the two came together.
REYES was a serious improvement over the scanline rendering (Poser 4, 3DS Max) without the enormous calculation times from the raytracers in those days, and with the ability to chop rendering tasks in pieces to support large scale projects. It did not support extensive raytracing (*) but offered speedy alternatives (environment mapping) instead. Later on, Pixar enhanced the Renderman techniques by adding explicit raytracing to create their own PhotoRealistic Renderman toolkit.
So it might come as a shock to you, but FireFly is not raytracing very well. By design.

(*) for the tech’s amongst you: classical raytracing techniques scatter rays of light throughout the scene, and must consider the scene, and the objects, as a whole to do so. The REYES algorithm on the other hand chops a scene into chunks (buckets) and then into very tiny pieces (micropolygons) in an early stage. So both treat the scene geometry in opposite ways. As a result, REYES based renderers have problems with raytracing, and raytracing renderers have problems with performance.

A view on characters

So, the introduction of Poser 5 was a milestone in its history, and a heavy one. Next to the software and its functions, it had impact on content and future developments as well. Up till then, DAZ had created the Vicky and Mike characters (versions 1 and 2) based on the P4 female and male, which as such were Zygothe products. The turnover to Poser 5 brought some serious licensing issues between MetaCreations and DAZ, and the latter decided to go their own way.

This own way introduced the unimesh geometry, the wish to create all characters from one single mesh. Vicky and Mike 3 introduced that concept, soon to be followed by Stephanie 3 which was a real-person body scan translated to the unimesh. DAZ also had their own view on the software, which brought us Daz Studio consisting of a free base with paid plugins – just a completely different marketing concept compared to Poser.
Boths DAZ views developed, and after a successful rebuild of Vick and Mike 4 using the new modo modeler, and after successfully turning Girl 4, Steph 4 and so on into morphs of Vickys mesh, DAZ launched Genesis – the new generation unimesh, with all known figures (Vick and Mike 5 included) provided as morphs of that base mesh, and including a serious Poser contender Daz Studio 4, at the turn of 2011/2012. The weight-mapping mechanisms for smoother posing forced Smith Micro into similar features for Poser 9 / Pro 2012. But mainly, the full features of the new DAZ characters could not be deployed in Poser at the fullest, you needed DS4 for that.
This came as a serious chock to the Poser community. Being “Poser-compatible” was not the default anymore.

There is always more (on clothing)

Around the turn of the century, Serge Marck published his site www.poserfashion.net (before it got hacked, you can find the Original in Internet’s WayBackMachine). He published clothes for Poser 4 (conforming), Poser 5 (some dynamic for V3) and Poser 6 (dynamic, V4).He was into cloth simulation for some time already, and discussed SimCloth, Cloth:Reyes, ClothFX and Maya/Cloth. Apparently the relevant products in those days.

SimCloth is still around as a Max plugin. It’s opensource, so just go http://www.spot3d.com/simcloth/ and get the code, if you like. That is, if you want to find out about the internals. It’s created by Vladimir Koylazov (Vlado) in 2000 – 2002, and got a serious update in 2005. Vlado himself works at the Chaos Group, home of the VRay renderer. Small world.

ClothFX is announced (Jan 2004, www.thefreelibrary.com) as “the” cloth simulator for 3DS MAX, and referred to as the new name for Stitch. This one gets a Stitch Lite equivalent “compatible to Max4, Max5 and Stitch” (Feb 2003) and owned by Digimation. Didn’t they get the REM Infografica Modelbank also? During the issue of 3DS Max 7, ClothFX was distributed for free and since Max 8 it’s part of the program stack. According to the current 3Ds Max manuals, ClothFX is a trademark from Size8 software. Their single page website refers to TurboSquid where the free ClothFX was distributed.

According to various posts on the net, and forum posts in CGSociety, debates around REM Infografica and Reyes Infografica were around patents on fluid and cloth dynamics. Apparently, not all the clothing guys went with Javier Reyes… perhaps Size8 is just another part of that original team. We’ll never know.

In the meantime, life goes on and so does cloth simulation. Halfway 2012 I found:

Now, given the body scan thing, where do you think that Virtual Fashion clothing comes from, since Javier Reyes teamed up with MicroSoft in various fashion conferences, and the software disappeared from the consumers software market in 2009?

Now perhaps we can appreciate why FireFly is not that good in raytracing, and is very unlikely to become so in the near future. Till then we have to manage with translators (like Pose2Lux, or a Reality plugin for Poser perhaps?) into third party raytracers like LuxRender.

We also can appreciate why Cloth Room is very unlikely to undergo any drastic transformations. Till then we have to manage with a decent understanding of the tools at hand.

We also can appreciate why DAZ is demonstrating that Poser-compatibility is not an industry standard any more.

And finally, let’s not point at Smith Micro for the things they just inherited a few years ago.