Understanding cloth and having a mental model of the physics involved is necessary but not sufficient to make effective and efficient simulating systems. Creating those systems is a world in its own right. Especially those with an engineer’s way of looking at things might be interested in this mini tour through the deep down dungeons. Crash Course on Math & Physics (previous page) and Crash Course on Sims & settings  (this one) really are the math and physics loaded chapters. Any use of the underground escape tunnel brings you into Muppets Lab “where the future is made today”. You have been warned.

In this chapter, I’ll consider the simulation algorithms themselves. Finally, I’ll present some conclusions that help you further in handling the Poser parameters and cloth simulation.

Creating a computer simulation of a mechanical system requires the build of a ball-and-spring network. Like a mesh, the vertexes are small balls with carry all the mass, while the edges connecting the vertices are small (mass-less) springs which do the pushing and pulling. Balls and springs both take their share in damping, and the balls pick up the external forces and limitations like gravity, attached weights, air-damping, collision and friction to objects.

In order to make the simulation work like the real thing, various technical (constructive) aspects require attention. Building goods simulations is a serious profession. To name a few:

First, there is gravity only. But having the first ball moved will skew the forces on the second, and so on.

Then, you will get this, a piece of cloth skewing to the right-bottom corner when let loose. 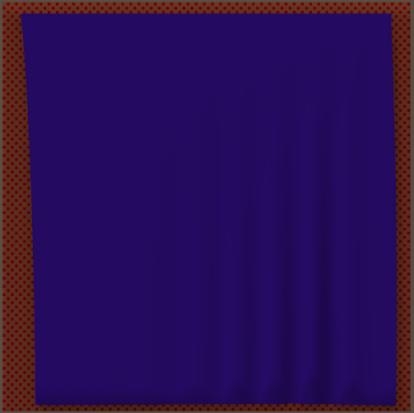 I suspect modern simulators like Marvellous Designer to be of the first kind, and Poser Cloth Sim of the second kind as it stems from the Poser 5 period (even before) and has hardly seen a methodical update after then.

Perhaps you’re familiar with software creation. Then you’re aware that only 20% of the effort really goes to the program’s functionality, and 80% is about the user interface, preventing people from inputting erroneous values or clicking buttons at the wrong moment or selecting impossible combinations of options; that is: making the software user aware. For sims, things are about similar. 20% is about the simulation itself and 80% is about handling the resource requirements, the artifacts from resonance and edges and non-linearities of nature.
This implies that you might have to upgrade yourself from a Poser User to a Poser Sim User.

Offering a cloth simulator to end users introduces a guaranteed set of shortcomings which are not well understood, by those users at least. Not simulating various aspects of cloth (thread thickness, weave density, weave structure) makes it harder to translate the real world to sim parameters, and impatience combined with insufficient resources introduces algorithms with additional artifacts (like skewing cloth).

Mesh structures, mesh densities and various resistance and damping settings will affect the presence or absence of edge effects and resonance, which – at least from an end users perspective – introduce seemingly random vertex movements and floppy edges. Increasing mesh densities, resistance and damping as well as longer simulation times (more frames) kill those effects eventually. Sometimes raising the damping might just make things worse instead of better. But for most people it’s unclear that they have to cope with simulation artifacts that have nothing to do with cloth behavior or with their use of Cloth Room.

In the end, it’s clear not what is meant by the various kinds of parameters:

When I take the backdoor to enter the stage Cloth Room behind the scenes, that is: I take a look at the Python manual, I find some parameters which go unsupported by the properties dials in the 4th panel of the cloth room. These are all of them:

Cloth info about a cloth prop or cloth figure is stored in the pp2/ppz (prop) and cr2/crz (figure) respectively, and looks like: