When I run a simulation calculation, a few things happen that are worthwhile to be aware of. Each sim runs in a number of iterative steps, there are two or more of those steps for each frame in the animation. The animation – even if nothing moves or animates – generates the time for the cloth to drape properly, driven by gravity, some wind perhaps, and various frictions and forces within the cloth element, between the cloth elements, and between the cloth elements and the collision objects. The basic idea is that when the cloth is draped well at the start, and the figure gradually moves into a more elaborated pose, the cloth will follow and will drape to that pose accordingly.

The sim settings even offer a Drape-period, intended to have the collision figures change from the T-pose into their frame-1 pose. Or to give the cloth draping a head start, while the collision figures are not moving at all. The advantage of this is that a cloth-sim specific animation is added without disturbing the scene animation as such, the disadvantage is that the movements during the drape period cannot be affected. So arms can cross bodies or legs and ruin he sim instead of helping it forward. When the sim runs during my own animation, I can prevent issues like that by fine-tuning the animation itself before I run the sim calculations.

Hence in general I start with my figures in T-pose at frame 1, give them 1 sec to take a normal pose in normal clothes, or 2 sec for a complex pose far from the T-pose or when in tight, complex or heavy clothing, and maybe even 4 sec in the case of all together. The main issue is: can the pose – in the real world – by a normal, trained – life! – person be made in the period set for it while wearing those kind of clothes?

Okay, the calculations kick in and all parameters describing the physical reality combine with the sim algorithms to make a cloth mesh change shape and position: all its vertices are affected. This is the easy part, and cloth simulators can do it quite efficient. And from the Poser animation, the collision object movements are obtained as well. All this is done per simulation step, defined by: the number of steps per frame and 30 frames per second. So for 4 steps per frame and an animation of 60 frames, the calculation loops 4×60=240 times to cover 60/30=2 sec of animation.
After moving all vertices for that step, the next step is: collision detection.

The collision object surface gets a virtual version, by offsetting it towards the cloth surface. Therefore the collision will take place at some distance between the two, which gives the cloth some thickness. There is no extra calculation required, the setting itself does not affect PC resource usage.

To find out for which vertices collision calculations have to be performed, a layer with the thickness defined by Collision Depth is imagined around one of the surfaces (cloth or collision object, does not matter, all movements and positions are relative anyway), and the vertices of the other surface are tested against it.

Notes on the Reference Manual

The correct definitions are exactly the other way around. Offset determines the thickness between cloth and object, help reduce poke-through and can make the cloth look static, while Depth defines the collision handling process and can require more resources. 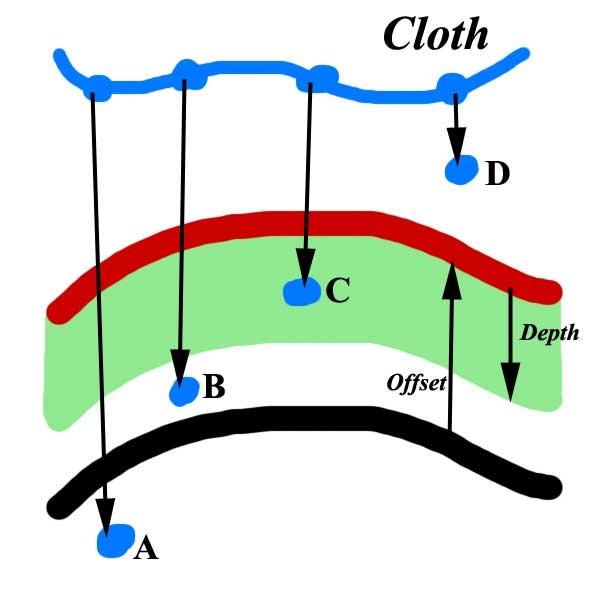 Collision Depth has a minimum of 0.0 mm

It’s proper policy to check those options before increasing Steps per Frame. This parameters is limited to whole numbers from 2 to 33333.

Actually, offset and depth are parameters for the collision object (in a specific sim). The object is extruded towards the cloth with an amount Offset, and then this virtual surface gets an inward thickness Depth. All cloth vertices in and around this area are seen as collision candidates and prone to further evaluation.

Once the vertices are labeled for further testing, those further collision tests come in flavors:

As said: each loop starts with a physics/ real world related pass through the vertices. Such a pass can be made in two ways:

For instance, the image shows what happens with a simple square cloth made of little quad polys just hanging down under its own weight. It skews to the bottom right, with some extra tension at the left side and more folds in the right half.

I’ll tell you: the sim loop starts at the bottom right, and then goes to the left and up. That is: against the UV coordinates, from high to low. Left or right is a choice, but bottom up makes sense as the usual driving force behind cloth sims is gravity, pulling down.

Something you can do about? Well, it mainly happens with rather low (10 or less) settings for Shear and Stretch Resistance. You can raise them, or dampen the effect by raising the Stretch Damping, or take it for granted when it does not hurt the final result too much. But at least; it’s the sim itself, it’s not you. 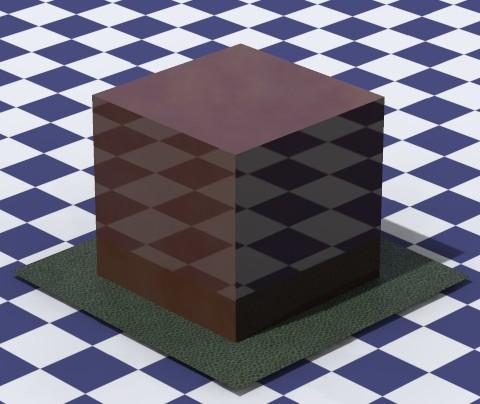 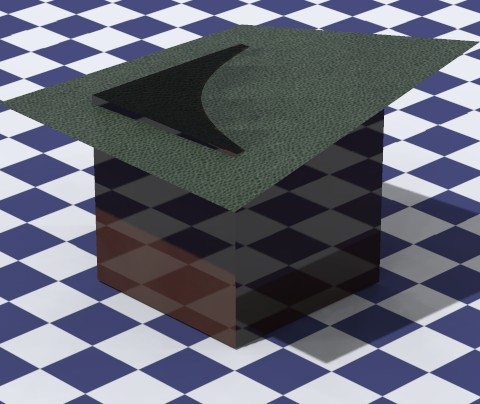 This is a simple cube (images by Bagginsbill), and a simple four-vertex square piece of cloth. With no additional options checked, the cloth falls right through the cube. This can be expected, as “cloth vertex against object polygon” is the default setting, and no cloth vertex touches the cube surface while falling down.

This shows that the sim mechanism does not perform any additional subdivision within the cloth, it just works with the mesh information.

With “object vertex against cloth polygon” checked the cloth is stopped by the cube, with an artifact. Three corners seem to fall through a bit, and the fourth one does not. Why is that?

Well, each time first the position of a vertex is calculated from the forces, velocities and other physical aspects. Apparently, in this case, the vertex ended up just below the surface level of the cube. Then the collision detection kicks in. For the first cloth vertex down and three up, no cube corner passes the cloth polygon. Nor does this happen when the second and third cloth vertex come down. But when the forth cloth vertex comes down, all four cube corners pass the cloth poly. Collision detected! And that forth vertex is put back at the offset height above the surface.

Why is the image showing things a bit different then?
That is because the renderer is smoothing and slightly curving the surface, while the sim calculations do not. When I connect the lower left corner of the cloth and the upper right one b a straight line, the upper left cube corner will be underneath. The Poser preview hardly smoothes either. As a result, the renderer might show poke-through while the preview does not, or the other way around, while the sim thinks it’s doing fine given the options checked and the time and step sizes that the calculations was allowed to use.

Why aren’t the lower vertices falling down anymore? What makes this a stable solution?
So I tried again, different offset (5cm). The preview shows that this is about the minimum distance of the cloth above the surface, but above the surface only. Over the edges of the surface, the vertices are looking down at the ground. The sharp fold is smoothed out in the render. End 100 frames later, the solution is not that stable after all, and the cloth sails to the ground. 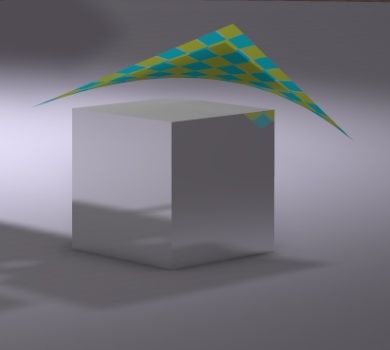 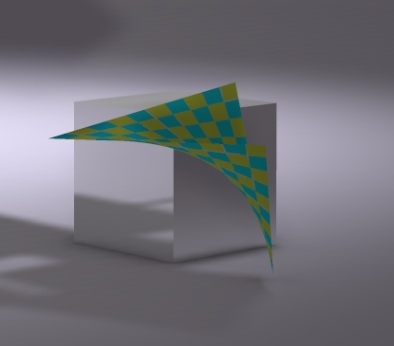 By just expanding the box I made the cloth fall right onto the surface. All issues were gone, and all four cloth vertices ended somewhat above the cube surface, at a distance dictated by the Collision Offset for the cube.

Now I was a bit curious to the cloth self-collision mechanism. Two simple four-vertex cloth pieces ended up on top of each other. One at the offset distance above the cube. The second a 7cm distance above the first, a distance that did not change whatever parameter I adjusted. 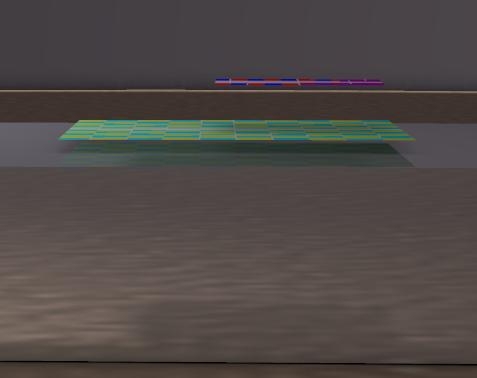 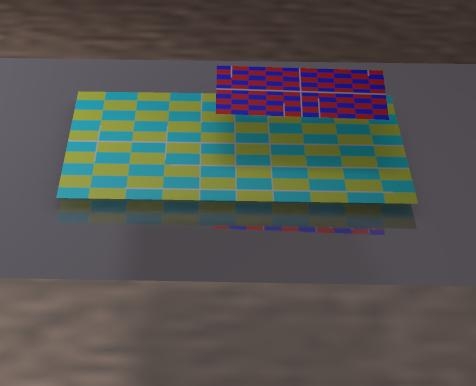 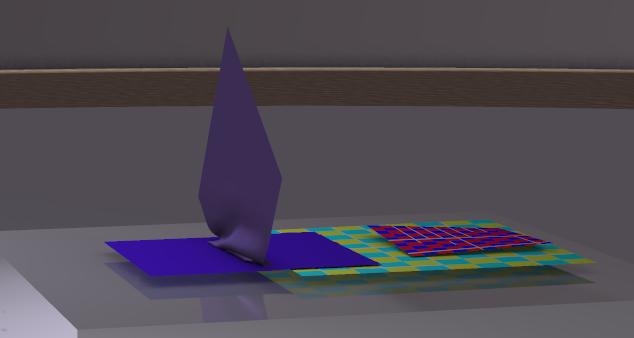 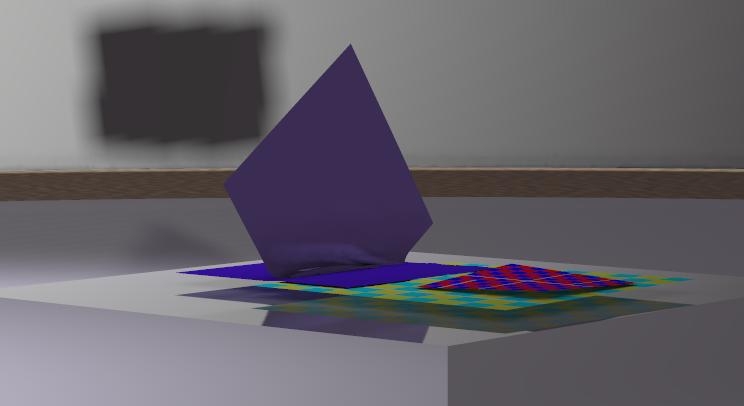 In other words:
watch out for the overly simple pieces of cloth. A piece of 10,000 polys behaves different that a piece of one poly.