When I started to Google on cloth simulation, I stumbled into
http://www.animares.com/book/Secondary-Motion/Cloth/Hintergrund.html.
Its in German, on issues with cloth simulation. The page mainly noted to watch out for parameter settings, conversion and scale.
In short, if the parameters are determined for seconds, meters, kilograms etc and the mesh is defined in inches or internal (poser) units, then you’re off. I’ll let this alone, the Poser parameters are in semi-metrics (cm, s, gram), and I already mentioned the gravity matching the Earth surface conditions. Every now and then in this tutorial you’ll see me juggle to end up right. But for users of Imperial units (inches etc) there is a health warning in here: watch your units.
Also, cloth in real life does not scale, and neither do cloth simulators. Sheets of 1×1 mm, 1×1 mtr and 1×1 km really do behave different. Thread thickness plays a role, and so does the thread pulling strength and loads. You cannot fold the 1x1mm piece, and a 1km fibre will break under its own weight. Things like that. 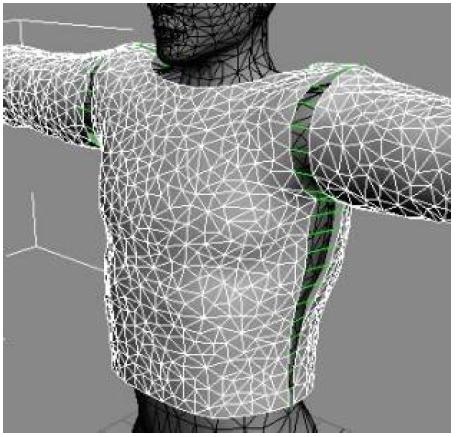 The webpage also noted that although regular meshes do fine in most areas of 3D, cloth simulation is not one of them. Cloth Simulation benefits from a “Delaunay-Method” which gives irregular triangulation of meshes. It’s implemented in Sim Cloth / Clothmesh, in Cloth Reyes / Hexamesh, in ClothFX / Cloth Panel and in Maya / Cloth. So they said. A familiar collection.

Since ClothFX ended up in 3DSMax (see Poser features in perspective) it’s the Hair&Cloth chapter from 3DSMax that presents clear examples. With a few splines the contours of a garment are defined, and the Garment Maker creates the irregular mesh from it. For a shirt in development:

And for a pocket attached to it (just to illustrate what an irregular mesh looks like):

Since ClothReyes is implemented as Poser Cloth Room, let’s see what we can find out. Google is our friend.
Well, I end up at a program called Virtual Fashion (Pro 1.5), available in Spanish and English, July 2009, with the ability to export Quad and Hexa Meshes to Poser. Doesn’t it sound familiar (Poser features in perspective)?
A Mesh/Garment Maker apparently was not included when Cloth:Reyes was included into Poser, I can’t see it different. Poser got the simulator only.
In the meantime, Hexamesh itself is a toolkit doing fine in CAD/CAM environments, like the fabrication of (e.g. medical) components – which is not on our route.

I’m presenting this meshing story, because simulation results appear to be dependent on mesh structures and people ask (in forums etc) about “best mesh structures” and “what to do with existing mesh files”. We don’t need to re-invent wheels here. At least a serious part of this tutorial is devoted to mesh structures.
So I might need a tool to turn regular (quad, tri, …) meshes into irregular ones.

Since people are fond of Marvelous Designer as a cloth making toolkit, the Show Mesh example in the manual shows: 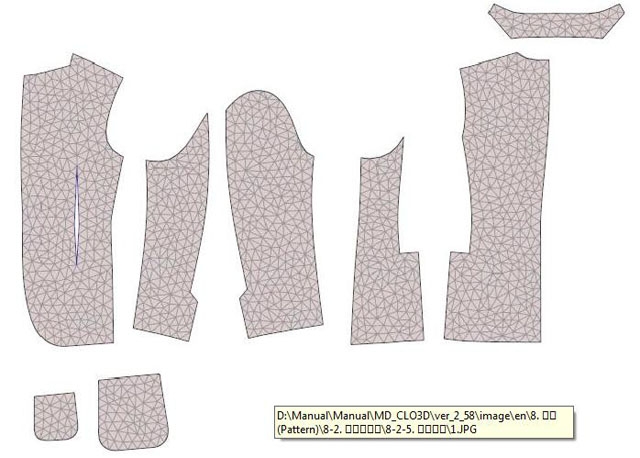 I continued my strolling around the Net and in the end I found myself buried deep down in a worldwide scientific community on cloth simulation, US patents included, which evolved from about the mid ’80s. That was about the moment I stopped in the scientific arena after getting my MSc on applied math and experimental physics. I never looked back. This means to me that I will stop looking further into this area on the vertex level. Back to the front! Let’s make fun images. But I’ll give you what I found on the ways forth and back.

From www.poserfashion.net (before it got hacked, you can find the Original in Internet’s WayBackMachine) I learned that the author (Serge Marck) was into cloth sim long before Poser started doing it. He states that all cloth sim routines (those days) were based on the modeling of physical fibre behaviour in cloth. He also flagged and demonstrated that because of this modeling, the simulation results depend on non-virtual things as real world cloth size and structure. In effect, he showed differences (from Cloth Room) based on cloth size at constant vertex density, on vertex density at constant cloth size, and on mesh type (quad vs tris) at constant density and size.

His main source was a tutorial by P.S. Karthikeyan. It’s nowhere nowadays, I only could find a Russian translation of one chapter out of it (Google Translate is my friend too), on the modeling fundamentals. This said that all started in the ’80s from the well understood behaviour of cables (hanging bridges, telegraph cables) and the effects of fibre parameters, the effects of fibre thickness on those parameters, and the effects of gravity and wind. Cloth then is interpreted as a two-way weave of cloth fibres each described with cable behaviour.

It also said that – at those days – P.S. Karthikeyan was a 3rd year student on the Aerospace Institute in Madras, India. I did not find any other references to him related to cloth sim, after that. But I did find that the tutorial must have been very good, because it’s quoted in about every paper on this matter from those days on. Google rocks.

One of the papers I ran into looked worth downloading and sharing, it looked readable, an overview on fundamentals and implementations in the popular cloth sim software mentioned above and in various forumposts. Recommended.
This researchpaper can be downloaded here as well (10Mb, use Right-click Save As…), as it seems to be disappeared from its original location. This original location is the RISC – Research Institute for Symbolic Computation, deep down the science dungeons. Get me out!

With respect to all of this, Cloth Room definitely is a different beast than Materials Room or alike. It’s not a Room at all, it’s the Magic Kingdom Castle, or the complete Disneyland Park around it. I’m going back to the front gate. See you there.