Actually, Poser performs simulation calculations upon a mechanical structure, which can be represented well by a “spring net”: a structure of small (steel) balls, connected by tension springs and torsion springs. More details on that in Sim Calcs in the Cloth Mesh and Crash Course on… Sims (part V). Those elements interact according to the basic laws of mechanics. Translated to Poser, the balls of the spring net take the interaction with the scene and the collision objects: density, air damping and the frictions. The springs take all cloth-internal interactions: folding, shearing and stretching.

At the start of a calculation, the mesh structures of the clothing elements are transformed into such spring nets. It’s a simple transformation, one-to-one without subdivision (*): each vertex in the mesh becomes a ball, each edge between vertices becomes a tension spring (handling stretching) and between all adjacent existing edges we’ll get torsion springs (handling folding and shearing). This implies that mesh structures with equivalent vertices will differ only in folding, shearing and stretching and not in the other factors. Let’s see how this works out.
(*) when there was subdivision, then the phenomena described in The Sim Engine would not occur. So there isn’t any. 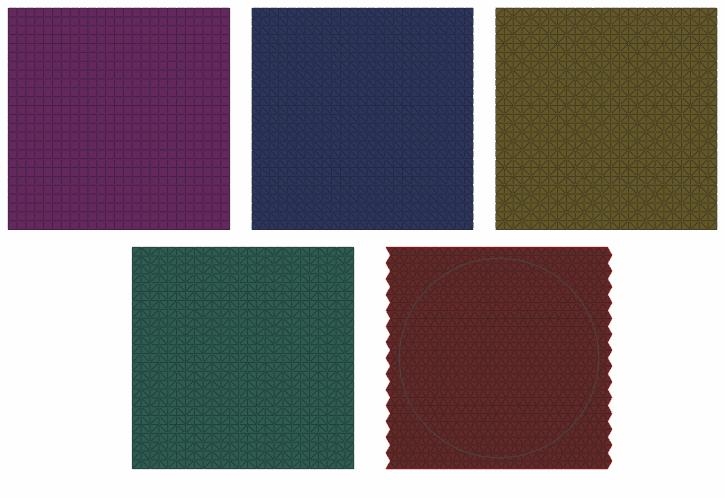 Meshes structures come in sorts, I can’t possibly handle them all. For a particular one, I can ask myself: if this were a real world object build from balls and springs, how would it behave? In this chapter, I consider: Quads, Mono-tris (all diagonals in the same direction), Diamond-tris (or: X-tris, alternating diagonals horizontally and vertically), Fish-tris (or: ZigZag, alternating vertically, same horizontally or vice versa), and Hex’s.

In theory: research reports tell that regularity kills the sim, the more irregular the mesh, the better. Making irregular tri-structures is known as Delaunay triangulation. More on this in Cloth Simulation in Perspective (part IV).

In my observation, the most regular structures have the most artifacts in their behavior. But also:

Doubling the density of the 3D mesh implies: halving the length of the edges, and quadrupling the amount of edges, corners and vertices (doubling in two directions or dimensions, cloth is a surface). What does it matter?

Well, not that much. While I keep the parameters intact, I still get cloth with the same Cloth Density and so on. Stretching, shearing, all remains the same. Even the total amount of folding will not change, as the same Folding Resistance has to be catered for. Except that smaller polys will give me more but finer folds instead of less but larger folds. Bends of the cloth around a corner will be smoother, performed in more, smaller steps. And in the section on thread thickness and Cloth Density (Sim Calcs in the Cloth Mesh) we’ll see that altering the folding relative to the other effects suggests the use of thicker (increase) or thinner (decrease) threads in the weave. In the latter case, the cloth will appear thinner, smoother, silkier.
Note the words “suggests” and “appear”: the cloth behaves as if we’ve changed the parameters, without actually doing so.

2x2mtr cloth, at densities: 10mm, 20mm, 40mm, 80mm. No difference in shear and stretch. The finer the density, the finer the folds that can be made. The ones at the right are quite heavy.

Next image shows the wireframe (anti-aliased).

Note that Android Andy uses meshes of say a 1x1cm density, while Vicky4 comes at about 0.5×0.5 or so. Size does matter. In the fine details, in the final quality. Not in the rough end result.

No theory, just look at the facts first.

Six different mesh structures, fixed (choreographed) upon the upper row of vertices, all with the same, default cloth parameters, after 30 frames of hanging on their own weight. This is mainly a test on stretching.
Five of them behave more or less the same, the green one at the right is by far more stretchy and elastic, and skews to the right.

The next figure shows the towels hanging at one corner only (after 120 frames), which makes this a test on shearing, although stretching has effects too. Towels 2 and 3 from the left stretch far more than the others, towel 5 shows larger folds and the stretchy green one does its stretching here as well.

Mono-tri A ends the Diagonal Stretch with the diagonal edges downwards, Mono-tri B ends with the edge horizontally.

It’s easy to see that the two Mono-tris (nr 2 and 3 from the left), both with their diagonal edges in the same direction all over the cloth, stretches by far the most in the diagonal direction while they stretched the least of all vertically. This implies that during normal use the animation will tend to jiggle sideways (bottom-right, bottom-left, bottom-right, …) which hampers its use in animations, and will raise the need for longer simulations to get a stable result. It’s quite unnatural for cloth.

The green hex at the right stretches a lot as well, but it did so too in the vertical stretch. The ratio between those stretches, in the table with the lowest value 1.7, means that it stretches about equally in all directions. It’s just very flexible stuff. The Zigzag (yellow-pink, 2nd from the right) makes large folds so this kind of mesh introduces an extra fold resistance.

To some extend these issues can be repaired by altering the parameters. So I set shear (resistance) to 200 and stretch to 100 for both the Mono-tris, and I set fold to 2.5 and shear to 100 for the Zigzag. This equalized the results between the meshes:

Up till now, the quads (red-white) and the X-tris (blue-blue) both make the most normal cloth appearance to me. The hexes (green-green) do make a good cloth too, but a rather flexible kind: good folding, shearing and stretching with the same parameters as the other ones. To me this resembles the behavior of a loose home-knit woolen sweater like my mom made in the old days. The other mesh types can make a decent cloth as well but require higher shear, and either higher stretch (mono-tris) or lower fold (zigzag).

The next test is on fine folding, all the cloth pieces were dropped from hanging on one corner onto the floor. In the animation: each cloth went down during frame 240 to 480, this affected only the corner vertices in the choreographed groups.

Quads crumble, which gives irregular, sharp edges over the diagonals of the polys. More on this artifact in Mesh-behavior – crumbling.

(diagonals sideways) – it produces more finer folds than its equivalent. Mono-tri cloth has a directional difference build in.

These are Fishbone / Zigzags:

It looks as if it cannot make sharp bends, the folds remain fattish although the fold resistance was halved already.

Extremely flexible stuff, the heap is considerably lower / flatter than the other heaps.

Mesh density enables the cloth to make finer folds, like it’s thinner.
From the Marvelous Designer manual: set the Particle Distance to 20-40mm for prototyping and 5-10mm for presentation models. Makes sense. Note that Vicky has a 5mm resolution herself, so you’re always using low resolution cloth on high resolution collision surfaces.