After working a while in the Cloth Room, people feel that mesh structure and mesh density make a difference. The 3D mesh of the cloth element in the sim does affect the result, the dynamic behavior of the cloth and the calculations themselves. Some believe that the mesh in a way is translated to a mathematical simulation structure. Such a structure, in mechanical simulations, can be thought of as a “ball-and-spring network”. The balls take mass and some friction and damping, the springs take stretching and folding forces and the like, and some damping as well. 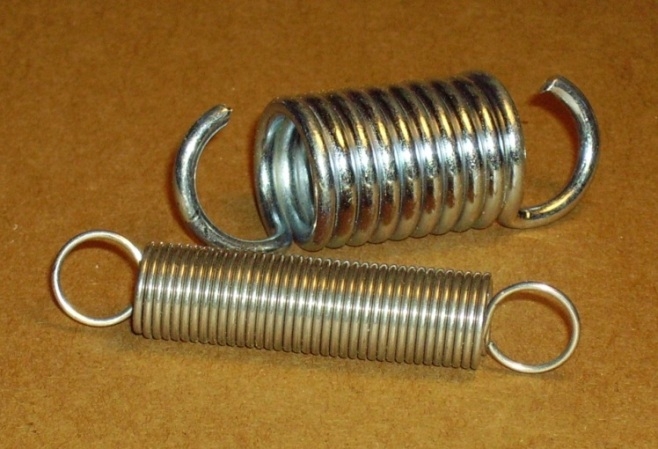 I’ll give the mere details of such sim structures in Crash Course on Physics… (part V), and present some summary in this chapter. 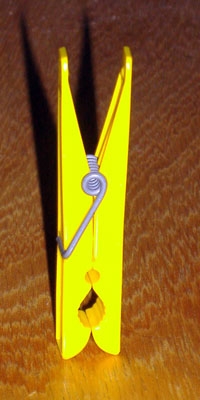 In the meantime people question: will the mesh be triangulated first, will it be subdivided first, or refined during the process when necessary? The answer, to my understanding, is: NO. The 3D mesh IS the structure. The vertices of the mesh become the balls, the edges become tension springs that resist elongation (so you’ve got to apply a pulling force), and between two adjacent or opposite edges we can find torsion springs that resist rotation (so you’ve got to apply torque). That’s about it. Period. Cloth has no equivalent for compression springs which resist shortening. I cannot shorten a cotton thread by pushing against its ends, can I?

So a coarse mesh with large polys, long edges, a few vertices will become a sim structure will long springs and large, heavy balls. And a fine mesh becomes a structure with many small balls and short springs. And tension springs are stiff, they cannot bend themselves, they can stretch only and shrink after being stretched first. Un-stretching is a better term better I think, they cannot really shrink but behave like fixed size rods when relaxed.

The connections between balls and springs are very flexible, but the springs around a ball are interconnected by torsion springs which limit the ball-and-spring poly in its deformations. I’ll discuss a load of examples further on, but the bottom-line for now is: if the edges lack in the 3D mesh, then the tension springs will lack in the sim structure, and the interconnecting torsion springs will be absent also. As a result, various mesh structures will behave different to various deforming forces.

The springs cater for:

These do determine the deformation of the cloth. The effect not only depends on the values of the behavioral parameters but also depends on the mesh density and structure. Given values will result in different effects for different meshes.

Stretching – means enlonging the tension spring by pulling. When it’s stretched, reducing the pulling force shortens the spring until it’s relaxed again and it won’t shorten any further. When I pull, the spring pulls back. As long as I pull harder than the spring, it keeps on elongating. When it’s got longer, it pulls harder until we pull equally hard (in opposite directions) and reach equilibrium. From natures laws, the forces applied are then proportional with (that is: a constant times) the relative elongation of the tension spring. Relative, so it does take a specific force to elongate the cloth x%. If the same force is applied to a longer spring it will stretch more in cm but an equal percentage. The constant involved is the Stretch-Resistance. 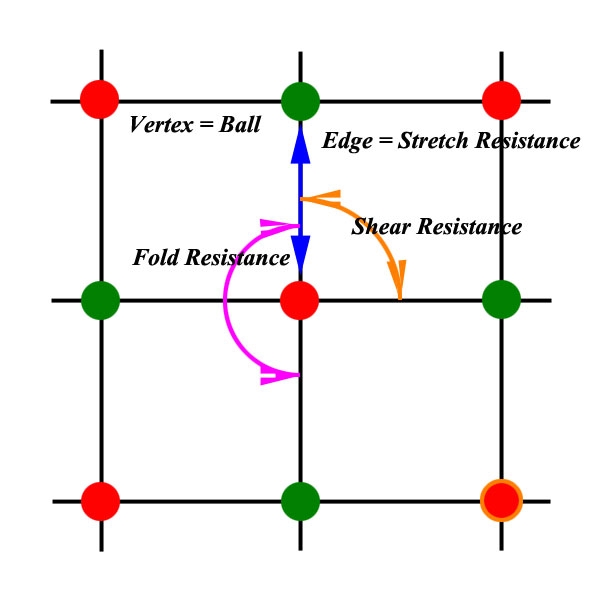 When I hang a weight onto a tension spring and let it go, it will jump a bit up and down (springs always come with vibrations), but this mechanism will lose its energy and the weight will come to a rest. This speed of energy loss is Stretch Damping, which stops the vibrations in due time.
In a mesh, stretching causes two adjacent polys to stick in the same plane.

Folding – happens when the stretching springs cannot shorten any more, hence: the cloth is relaxed. Now the tension springs start behaving like incompressible rods, and any pushing will force two adjacent polys to go out-of-plane. The cloth is folding. But the two opposite edges are connected by torsion springs, which resists any change of angle, with a force proportional to the angle of deformation. The constant involved is the Fold Resistance of the cloth.

In life, there are limits to folding and stretching cloth, as it may tear, the threads in the weave may snap, there is mainly resistance against folding at high speed but not when doing things slowly, and the folding springs might cause vibrations which require damping as well. Poser does not support all that.
But Poser does support the concept that Folding and Stretching are opposite phenomena. I cannot stretch and fold the cloth in the same direction (or better: opposite directions) at the same time. As hanging curtains show, I can stretch vertically (weight, gravity) and fold horizontally. For folding vertically, the gravity has to be countered first.

So I put my hands on a piece of cloth on the table, and move my hands in opposite directions, away from each other. That’s stretching. Moving them towards each other: that’s un-stretching first, then it becomes folding.

Shearing – happens when I fixate the cloth with one hand, and move it up or down with the other hand. A quad-poly will deform in a straightforward way: the angles between adjacent edges change though but all edges themselves keep their length. Note that this is the opposite of Stretching and Folding, where – for a quad poly – the angles between adjacent edges do not change but the edges change length (stretching) or not even that (folding). The counterforce by the cloth comes from torsion springs between the adjacent edges, they apply a force proportional to the angle of deformation. The constant involved is the Shear Resistance of the cloth.

In life, shear resistance in weaves is the result of the friction between adjacent threats in the cloth, depending on material, thread thickness and weave tightness. When this friction is high, you will have extra trouble bending and stretching the cloth as well, but it does not work the other way around: tablecloth does hardly stretch but shears well. And when cloth stretches easily one might expect easy shears too. This certainly holds for knits, but non-woven cloth like leather and rubber might be different. Shear for non-woven is something for the micro-fibers and molecules that make up the stuff.

Thicker threads
Let’s do some additional real life stuff: what happens when similar cloth gets made from threads which are twice as thick (diameter). For the thread itself, Weight per unit of length, Stretch Resistance and Shear Resistance will quadruple (2nd power) while Fold Resistance will octuple (3rd power (*)). But I will only need half of the amount of thread to make the same size of cloth, so finally cloth density, stretch- and shear resistance will double while fold-resistance will go fourfold: thicker stuff behaves much stiffer.

So, density, shear and stretch resistance behave the same when comparing A) one piece with double thick tread and B) two thin pieces of cloth put together. Relevant, as the latter occurs when I fold a piece of cloth at the edge and stitch things together to make a neat edge to a T-shirt or table-cloth or alike. Folding behaves different: two non-attached (!) thin layers have half the folding resistance of one thick layer. So my T-shirt edges might do something in between, when doubling cloth thickness I can go threefold here. How about the other parameters?

Weave tightness
Next to thread-thickness, weave-tightness is a cloth characteristic too. What happens when a loose weave is compared to a tight one, with say twice as many threads cramped in?

Again, the Frictions won’t change a bit. Density, stretch resistance, stretch damping, and fold resistance too will simply double for twice as many threads of the same thickness. Air damping sees twice the amount of threads too and will double. That is; double at least because a tight weave might block the air streams through the cloth far more. Will it go tenfold? More? Shear resistance will double at least too, twice the threads will experience twice the friction between them when shearing. But when the threads are really crushed together the threads will deform a bit, the contact surface between the threads increases, and the force that pushes those surfaces onto each other increases as well. Will it go tenfold? More?

Note that for non-weaves (rubber, fleece, leather, …) the concept of weave-tightness is rather meaningless. For those kinds of cloth materials, I just stick to the “thicker thread” idea when considering thicker cloth.

The other way around
Imagine, someone says: “these … are the parameters describing cloth material X”. Then do I need to know the thickness? First: no I don’t. Because we’ve seen that I can represent a thicker or thinner material by adjusting the density (that’s in grams per cm2) and all other parameters increase or decrease proportionally – except for the Frictions which don’t change at all.
Second: yes I do, so I can take it into account for additional fine tuning of the Folding, Shear Resistance and Air Damping adjustments as described above but also take it into account for adjusting the Collision Offset which emulates the cloth thickness in the final result.

Up till now I discussed the phenomena Stretch, Shear and Fold as they are considered in math and physics theory. Great, we’ve got the idea now, haven’t we? But… is Poser really working that way? 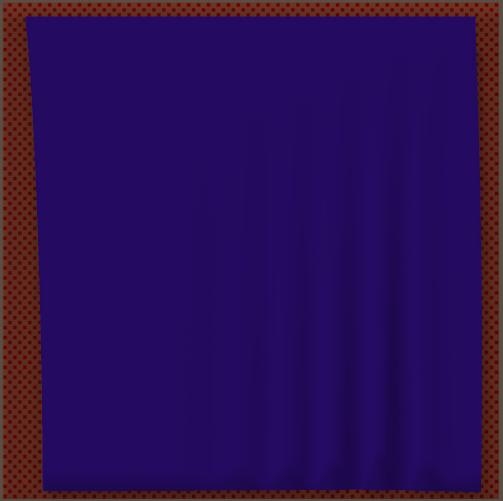 No it is not. Like in real life, stretching, shearing and folding all come together in the result, I can’t have isolated effects (except for laboratory situations). So does Poser, and actually: it improves the believability of the sim outcomes.

Let’s refer to a previous example of the banner hanging down. At low parameter values it becomes visible that the result not only shows stretching but also some skewing (hence: shearing) and some folding too. And when I start playing with the parameter values, I find that altering the shearing resistance does effect the stretching of the cloth too, and altering the stretch resistance changes the shearing of the cloth.

In other words, the physical, real world behavior is determined by a mixture of the parameter settings. And the other way around, it will be hard to determine the proper parameter values by measuring real world values. Is all lost then?

No, some generic rules could be observed: