Pose Room is everything about morph-dial and bone-driven mesh deformation without any link to reality. I can have a rope standing up and have Vicky walk right onto it towards the top. I can conform figure A to B, which means that they share the same morph and bone drivers, and that the B-ones are master. So I conform clothes to Vicky, pose Vicky, and take a shot. But I also could have clothes conform to Vicky conform to a skeleton, and pose the skeleton. Or, conform the skeleton to Vicky conform to clothes, and pose the clothes. It’s in the naming too. If a table has its legs named as a horse I can make it gallop just from your pose library. If the horse, or the table, has the legs named as Vicky I can make them wear jeans, and walk in them. If I really take care, I can have the table wear jeans and gallop at the same time, point and click.

We recognize figures as clothes, beings, vehicles, buildings, and gnarly trees, whatever. Poser doesn’t. Skeleton conformed to Vicky conformed to Jeans. Is Vicky clothes? How can Poser know? Why should Cloth Room care?
Cloth Room does not do poses. Cloth Room is a Morph Generator. An absolute, dynamic morph generator to be precise.

For the objects or object-parts that are announced “cloth” in a sim, the sim creates morph targets like the Morph Brush tool does. Applying the Morph tool to a mesh, either prop of figure, adds a Custom Morph dial to its parameters.

Applying a cloth sim to a mesh adds a Dynamics dial to its parameters.

By itself this dial ranges from -100,000 to +100,000 although only values between 0 (no morph) and 1 (full morph) can be considered useful. Via the dial settings (triangle at its right) I can adjust the settings, and also… Recalculate Dynamics. So when I’ve made changes to poses, animation, objects positions and the like I don’t have to visit Cloth Room.

In the usual case, an object is a mesh and its morph target is a variation on that mesh. The mix of those is determined with a morph dial, which can be animated. The dial value is animated, not the morph target. It’s a static morph, the same at every frame in the animation.

A cloth sim creates a dynamic morph, where the morph target itself changes over frames. The cloth animates when I keep the Dynamics dial value intact. On top of that, I can animate the dial value too.

So for those who are accustomed to handling Poser morphs, Cloth Room can lose its shine and magic right here. If you can handle morphs, you can handle cloth sim results. You only have to realize that the shape of the morph target changes during the animation. I’ll make some additional notes on this later on.

In each regular mesh, the positions of all vertices are relative to the origin of that mesh. Vertex coordinates are local coordinates, so if the mesh itself transforms it changes the relationship between its origin and its parent (ultimately the Universe) but all vertices keep their local position. When clothes are conforming, the mesh that makes up the clothes relates to the figure it conformed to and so, when that figure moves, so does the clothes mesh. So do morphs loaded onto that figure, their vertex positions are all relative too, as the figure moves, so does the morph.

For sim results, this is a problem as all non-clothified objects in the scene can be collision objects. Girl wears a robe which drapes onto the ground while being seated. The result of the sim depends on the positions of all of these elements. Consider two girls in the scene, both wearing a wide dress which collide to the other dress while dancing in the animation. Which dress-morph should be relative to which girl? And the dress morph is relative to the ground as well, and so on.

Poser solves this the hard way, and puts you and me in charge. If a dress-figure is conformed to Girl 1, or when a dress-prop is parented to Girl 1, then the morph from the sim will follow Girl 1. If the dress is not conformed nor parented, it will follow the Universe marker in the scene or: it does follow nothing. Then all vertex positions in the morph are absolute. The point of course is that a dress can only be conformed or parented to one other object in the scene. And the other point is that each clothing item in the sim can be parented to a different object. Poser is not going to decide.

But the sim result is more absolute than that, it’s absolute in time as well. You will find out when you set the sim properties, and not only the End Frame but the First Frame as well. Say, I put 31 to 60 in there. Then the cloth sim will make a 30 frame result, considering all object positions… from frame 1 to 30, and then publishes the result into frames 31 to 60. So for my girl wearing a robe, all movements of the robe will follow her moves… with a second (30 frames) difference. Girl chased by her wardrobe, with this we can have fun. I’m not sure about its practical use yet. 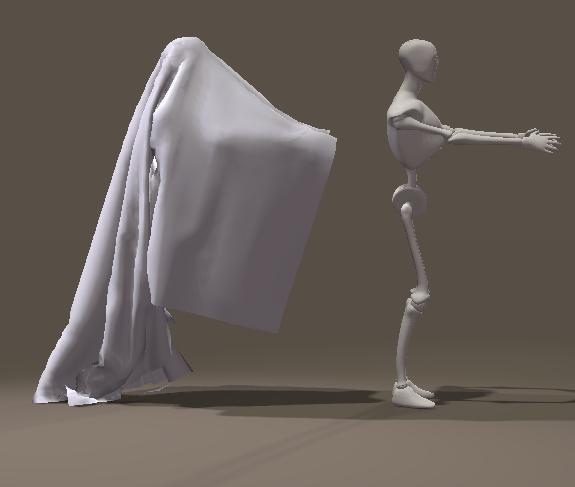 Yes, I can make a sim from 1-30, one from 31-60, and so on. Or even re-use the same sim and alter the settings. The 31-60 sim will not touch the 1-30 frames, only eventual 31-60 frames will get overwritten. But any animation that the 31-60 sim relies on has to be transferred to frame 1-30 before, as that is the animation range that sims really use. And then I will find that the cloth details in the frame 30 from the first run do not match the frame 31 cloth details from the second run. It’s somewhat like splitting a 1-60 frame animation into 1-30 frame halves, handle both halves separately and then glue them together in a video editor.

Except of course when I can clearly split scenes, and I want an integral approach of changes in lighting, materials, render settings and the like. Then it can be handy to have all the parts in one. It has not been my way of work up till now.

According to the Reference Manual, dynamic cloths are like props. When they were made out of props, they’ve remained props indeed. But when they were made of conforming elements, I might want to keep the embedded bone structure and conforming properties although the dynamic morphs overwrite any initial posing.

When I want to save to dynamic result as something separate, I’ve got two routes to choose from. In any case, I’ve got to move to the animation frame that presents the shape I want to fixate.

Save as a Prop
This takes “spawn as a prop” in the Group Editor. I’ve got to select a set of vertices / polygons from a clothing piece, and this set will be duplicated. This prop includes the original mesh info plus the morph info, but does not include any move, rotate or scale info applied as well. I’ve got to re-apply those to get the dynamic shape back.

For example, I wanted Android Andy to wear the Hooded Cloak, but after clothifying and simulating, the Fastener of the cloak came off. A typical example of non-welded portions of cloth when turning conforming clothes into dynamic. So I:

and re-ran the sim. Actually this turned a cloth Fastener into a stiff metal one or alike, but that’s fine for the moment. I could give it an engraved metal look in Material Room as well. I felt no need to save the new prop in the Library or to export is as an OBJ file, but those features are available if I want them.

Note that I cannot put the Fastener in the Soft / Rigid Decorated group, as it actively affects the draping of the cloth while elements in those groups only can follow passively.

Save as a Morph
In my understanding – but I’m not very handy at this yet – I need to use the menu: Object > Spawn Morph Target to create a regular morph dial for body parts or props. The menu: Figure > Create Full Body Morph creates a single master dial in the Body of a figure to drive all the separate dials in the body parts. Now I’ve frozen the dynamic morph as a static one.

To save a morph, I can export the object with As Morph Target and Include Existing Groups checked. The former loses the scene transform (move, rotate, scale) info, the latter enables a match with the original object when being loaded as a morph target later.

Parameters for cloth objects are not dedicated to a specific sim, they belong to the objects themselves like zones for the Material Room and object groups for posing (Pose and Setup Room).

When the cloth is unclothified and re-used in any sim later, all settings and groups are still associated with it.

So when the cloth object is (re)saved in the Library it gets those settings and groups saved as well. The additional information is stored in the CR2/CRZ for conforming clothes (figures), in the PP2/PPZ for props. This implies that a figure mesh in OBJ is not changed, and does not need to be re-distributed when sharing cloth settings. After turning a set of clothes into dynamic, the resulting CR2/CRZ can be distributed without the essential OBJ. This might save us from copywriting issues.