When a direct light shines on an object, the light will get diffused, reflected and transmitted from that object surface. The object will cast a shadow to another object, or to parts of the same object, behind it. Shadow maps are a fast but limited way to derive such direct shadows at rendering, raytraced shadows are slower to derive but more accurate. Those shadows can be blurred somewhat to represent the size of the light source. And they can get a reduced shadow intensity to represent the ambient lighting levels from the environment. But the latter is just a trick to compensate for Posers inabilities to handle such effects from direct lighting only.

In the meantime, the industry developed an approach to resolve the issue: IBL or Image Based Lighting. A point source in the scene radiates light according to an image map, but in an inverse way: the light rays are not leaving the light to the outside, but travel from the outside towards the light as if a huge sky dome surrounding the scene emits this environmental light. Using a dome object with the image onto it enhanced the illusion of such a surrounding environment, whether it’s a sky or a shop interior.

Although that increased the quality of the lighting it did not answer a similar requirement for shadowing. As a result, Ambient Occlusion (AO for short) was born to get better shadows as well. Better as in: reduced by environmental lighting. That was at least some step forward from the (ab)use of Ambient for adjusting the lighting levels in an object specific way.

So, the Ambient Occlusion surface node is meant for scenes without IDL, without IBL, lit by direct point- spot- or infinite lights only, without AO enabled for those lights. When the scene gets lit by IBL (which has no shadows and no highlights) and some direct lights as well, AO should be enabled for those lights and the AO materials node should be dropped. When the scene gets lit by IDL, it should not have IBL lights or any AO materials nodes. Direct lights can give some support (like flashing outdoors, or representing a sun shining in) and their AO properties can help to improve on their shadows even more but should be used with care.

For short: the AO node can be considered outdated, and is available for compatibility only. Use the AO properties of lights instead. 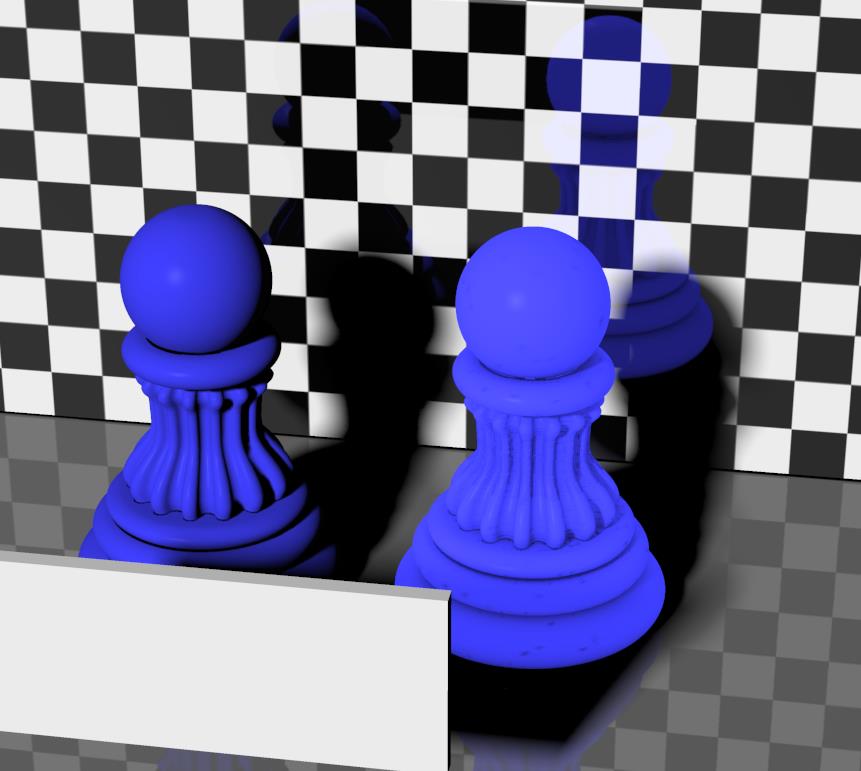 The left pawn shows regular diffuse, the right pawn has a (very limited) amount of AO assigned to the surface. It behaves like it glows a bit, and it hardly picks up shadows when an object blocks the light.

The surface having Ambient Occlusion shoots out rays to scan the neighborhood. Samples determines the ray-density (quality), MaxDist the maximum length of them. So shadows from surfaces further away are not dealt with. When the surface has displacement maps, RayBias will make the first portion of them ignored to avoid time-consuming raytracing on the tiny details. Both MaxWidth and RayBias are in the units I’ve set in Global Preferences (which is Meters in my case). Altering my preferences will affect the values shown, but of course not the effect itself. When taking values from other sources, I might have to convert for unit differences.

By default, AO is dealing with direct light only which is exactly what it’s made for, but by ticking the Evaluate in IDL, that can be changed. 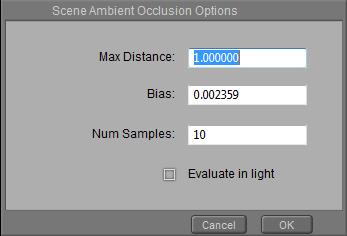 As said, instead of using the node on a surface, the use of the light property is preferred.

When clicking the [ Scene AO Options ] button the generic AO settings unfold in which I recognize all the other AO options from the node. Except that Strength is a per light setting, and the other options are the same for all. Like in IDL lighting which replaces all IBL, AO and more, the effects are the same for all objects in the scene now, as it should be.