Raytracing nodes like reflection, refraction and Fresnel work well for fully non-transparent surfaces. Refraction and Fresnel bring in full transparency on their own. As a consequence, those materials behave opaque to direct lighting, and produce dark shadows and block specularity as well. I might not want that.

Throwing in transparency however does have serious pitfalls, especially when combined with raytracing. Pitfalls and some ways to climb out of them are discussed here. Before doing so, it’s worthwhile pointing out that in Poser, transparency might mean:

Poser raytracing does a fine and efficient job, when the scene presents a limited amount of bounces between objects. Parallel mirrors, fields loaded with mutually reflecting Christmas balls and more like that might either take large amounts of render time, or might produce artefacts when the rays are killed too early.

Exactly that happens when an object becomes both transparent and reflective. Light passes the object at the front, bounces at the back, bounces at the front and so on resulting in an infinite amount of internal reflections. This can prolong render times considerably, while reducing those with low(er) values of Raytrace Bounces in Render Settings might cripple the results somewhat. This means that I’ve got a challenge in finding the proper balance between time and quality.

Because light not only bounces from the surface at the first hit, but also gets light added from the bounces following on that, the final brightness of the reflection increases. This is according to real life, but unfortunately the dimming of the light during those internal bounces is not. Transparency in Poser is a surface effect, while it’s something volumetric in nature. The thicker the object, or the more bounces have taken place, the more light is absorbed on the way and the more the light is dimmed.

Note: Poser, from version 10 up and in all Pro versions, offers a Gamma Correction mechanism to enhance the photorealism of render results. Very recommended. As reflected light is considered an independent component in the surface definitions, the gamma mechanism should be applied to the Reflect settings. That is: all Values should remain at 1.0 (or 0.0, but no intermediate values), any reduction or coloring in reflectivity should be embedded in color swatches, and any image map involved should have set its Gamma set to Render Gamma or alike. However, Transparency itself is considered a ‘blender’: more of one component (say foreground reflecting) implies less of the other (background shining through). For those elements, the Gamma mechanism should be avoided or bypassed whenever possible. That is: Color swatches should remain white (or black), all intermediate values should be in a Value slot, and any images involved should have their Gamma value set to 1.0 if applicable. See this article for details.

All raytracing, including the Refraction node does work on indirect light from objects only. Direct light, whether diffuse or specular, is not reflected nor refracted. Such light, passing a refractive object, makes deep shadows and can’t make any highlights behind the object anymore. When I want the proper bright shadows of transparent objects, I need to use Transparency instead. 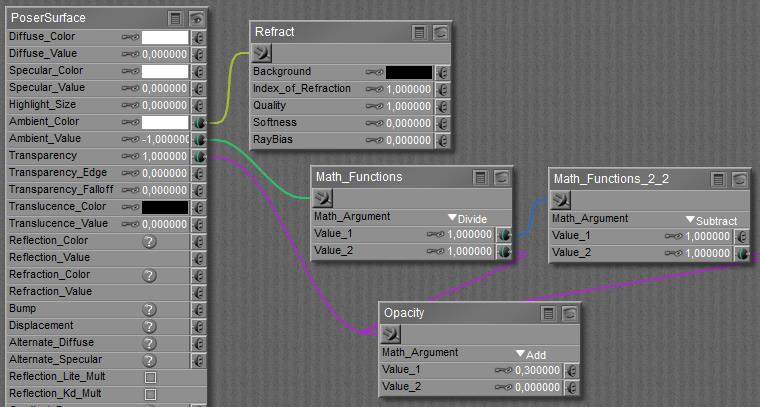 Now I can add in the required refraction (additional Refract node), with an IoR related to the material at hand, say 1.5. Again, the refraction is proportional to the amount of transparency so I can re-use that function outcome: 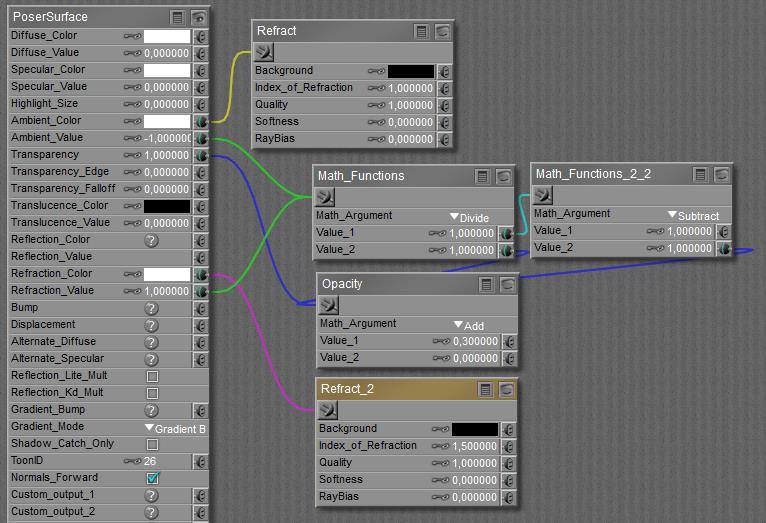 In real life, at skew angles it gets harder for light waves to enter a material. So transparency decreases, and since the energy has to go somewhere, reflectivity increases. This is understood as the Fresnel principle.

The Fresnel node itself, or any simple combination of refraction with Fresnel_Blend, has the same (dis)advantages as a straightforward refraction: it assumes a full transparent clear object, which then behaves as opaque for direct light and produces far too hard shadows. So I’ll elaborate on the previous way of work instead.

First, the fixed value for opacity can be replaced by a Fresnel_Blend node. This node has to represent opacity too, and so it has to produce high (white) values at skew angles and low (black) ones at the inside of the object.

Second, I add Reflect, and I’ll do so in the Alternate_Diffuse slot which gets adjusted for transparency automatically (like regular Diffuse).And since reflection caters for indirect light only I’ll add its equivalent for direct light: specular. In which case the Blinn node provides the best way forward.

So now I’ve got the definition for homogeneous glass or a liquid, uncolored but with a limited transparency, as presented by Bagginsbill (Renderosity forum, March 20, 2014): 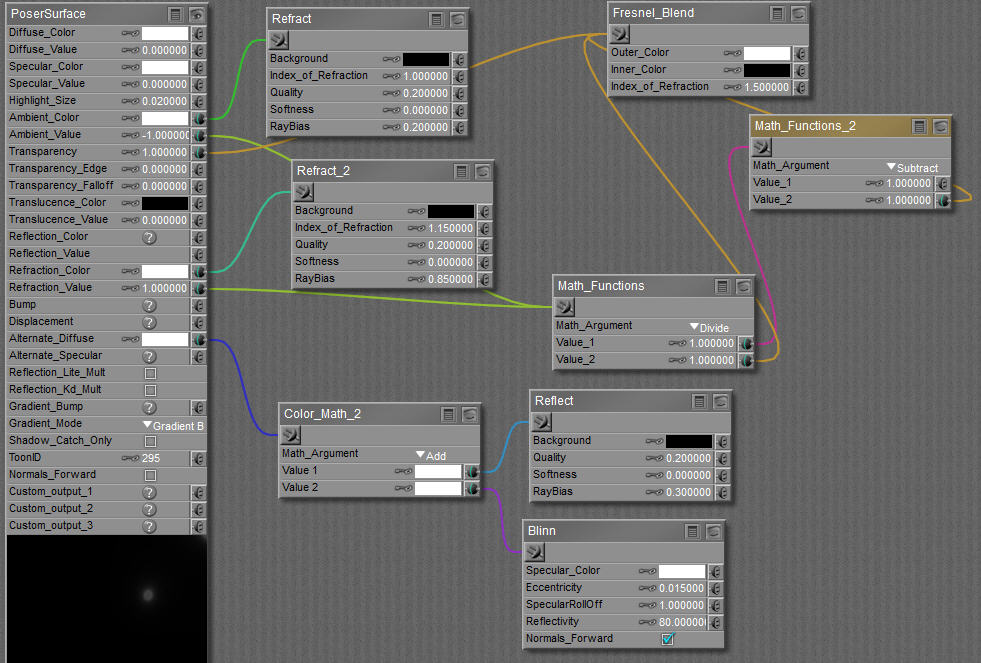 For colored glass or liquid, the Refraction_Color can be adjusted. No other swatches need adjustment, as reflection and specularity go uncolored (except for metals, which are non-transparent) and Transparency goes uncolored as well, so the first Refract (added into Ambient) for compensation should stay uncolored as well: Ambient_Color remains white.