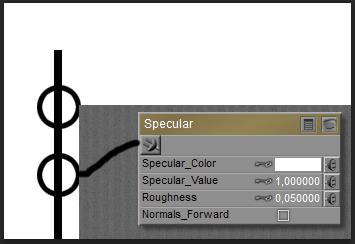 Left: Specular Color, Value (set to 0.2), Highlight Size (0.05) and Normals Forward embedded in the PoserSurface definition. Right: the embedded diffuse is nullified (Value=0), the node is plugged into Alt Specular.

Like the PoserSurface component itself, the Specular node has Color, Value and Normals Forward for parameters. Highlight Size as used in the PoserSurface and Roughness as used in the node refer to the same, just different words for the same concept. The same value will render the same result. The smoother the surface, the smaller the roughness value, the sharper, stronger and smaller the highlight will be. Note however that Highlight Size and Roughness come with different default values. 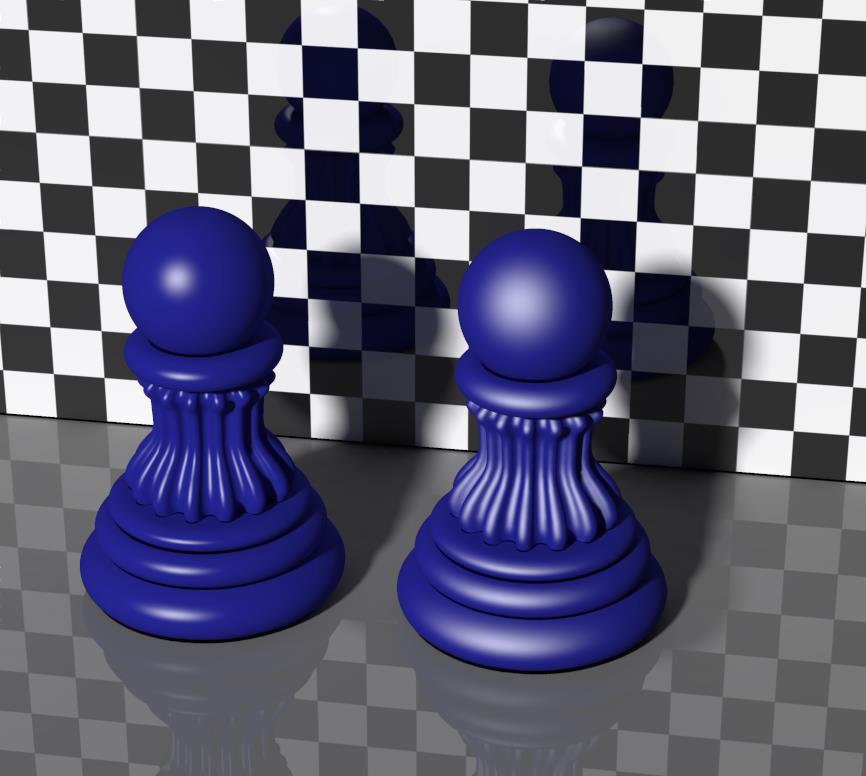 On highlights and specularity 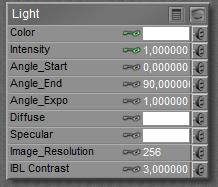 Nor IBL direct lights, nor IDL lighting setups do supply any specular lighting, and therefore cannot create highlights in the render.

Note that any form of specular lighting, handled by the specular nodes or any of its alternatives (Blinn, …) actually represents the reflection of the direct lights in the scene themselves onto the object surface. The reflective properties of a PoserSurface only bounce the (diffuse) light from surrounding objects in the scene, not from lights. As reflected light itself is considered diffuse and not specular, reflections of lights in mirrors, metal objects or anything else will not create highlights on other objects by themselves.

Also note – with respect to IDL and reflections – that the resulting highlights from specular lighting will be considered diffuse light themselves. So they will contribute in IDL lighting the scene, they will occur in reflections, and again – they will not create highlights on other objects.

So, the Specular node (as well as its embedded variant, as well as all its alternatives) responds to specular light. The response is to re-emit the received light, independent of any angle of incidence for the incoming light rays, in the form of highlights on the surface. Plus: Color and Value work together.

As Poser is not raytracing to derive the specular highlights and as blurred highlights are not properly described by the sharp “angle in equals angle out” concept as is the case with decent mirrors, one has to define another rule for re-distributing the bounced light. And though the specular principle calculates and renders pretty fast, it produces quite unrealistic results and makes everything look like a bad representation of hard plastic. This is why Poser offers alternatives, like Blinn or Anisotropic  for microscopically grooved surfaces.

There is a confusing nomenclature in Poser regarding “Phong”. There is a Phong node, but it does not implement what is now called the Phong Reflection Model. It implements something that Mr. Phong used in the 70’s which has now been discarded because computers are so much faster – we can use better models. With some subtle differences and variation, we can make these connections:

The Glossy node is none of these. It is a clever little cheat to deal with the fact that our CG lights are effectively point sources. A point light has no dimension, and a perfect glossy specular reflection of it would have no dimension, either. The Glossy node ignores that little fact. It simulates what you’d get from a glossy surface if the light actually had some finite width to it.